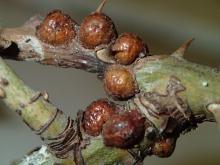 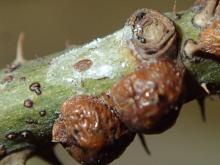 Pest description and damage Lecanium scale are most noticed as the female scales expand in size in the spring. As females swell in the spring, they produce large egg masses under the scale and release considerable honeydew that coats nearby foliage. The female lecanium scale are about 0.13 inch in diameter and vary from red to dark brown in color. They are oval and resemble small "helmets," "turtles," or bumps on branches and stems. Male scale are smaller, fairly flat, and oblong. Crawlers are pale yellow and overwinter on stems.

Biology and life history Lecanium scale overwinter as immatures on twigs and branches. They resume feeding in the spring and begin to swell; the males, when mature, split the scale cover and fly to find females. The fertilized female swells to a hemispherical shape and eggs are laid underneath the scale covering in May-June. The females are initially soft and exude honeydew, then harden. The eggs remain under the scale until hatching in early summer. Newly hatched yellowish-brown crawlers congregate on small branches, twigs and the undersides of leaves. When infestations are heavy, crawlers are found on the upper surface of leaves, and on the fruit. Young scales are dispersed by wind, rain, irrigation, or by people and machinery. After 4 to 6 weeks on the leaves, the young return to the stems and twigs to feed and overwinter. There is one generation per year.

Pest monitoring Inspect twigs during the dormant season for flat pale yellow scale crawlers on twigs. Pay attention to weak plants. In late spring, examine beneath any hemispherical females to determine if eggs are still present (tiny beads roll out of the scale) or have hatched (white fluff in the scale). The new crawlers are detected, using black tape with sticky side out on twigs near old scales, in May. Crawlers are best observed through a 10X magnifying glass.

Remove or squash swelling scale in the spring when they are just starting to mature or prune out heavily infested branches.

A number of predatory mites and parasitoid wasps feed on these scale insects. Check beneath scale for predator mites or wasp grubs to determine scale mortality. Holes in scale bodies indicate that parasitoids have emerged from the scale.

Hosts and Pests of Landscape Plants