Recognizing Sapsucker Damage on your Trees 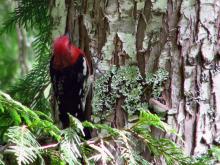 A common cause of tree damage in backyards and small woodlands is from sapsuckers (Sphyrapicus spp.), which are a species of woodpecker. 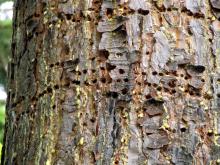 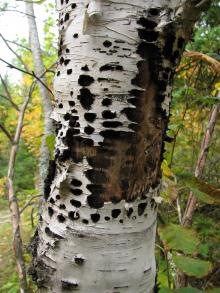 Thin-barked trees such as birch are particularly susceptible to sapsucker damage.

Sapsucker damage is easy to identify. The holes are approximately .25 inch in diameter and are drilled (pecked) in horizontal and vertical rows. There are usually many holes close together. This is often mistaken for insect damage such as that by bark beetles or other boring insects. Insect damage will typically have fewer, smaller holes, and the holes will be randomly distributed, not in rows like sapsucker holes. Insect holes may also have some boring dust (frass) in or on the ground under them, whereas sapsucker holes will not. The presence of sapsucker damage does not necessarily mean the tree has an insect infestation. Unlike other woodpeckers, sapsuckers are actually drilling for the tree sap, not for insects living in the tree. However, sapsucker damage may attract opportunistic damaging insects, which the sapsucker may then subsequently feed on.

Sapsuckers will feed on both hardwoods and conifers. They prefer foraging on trees with thin bark, such as birch. Older conifers with thick and ridged bark are not as susceptible to sapsucker-caused damage. If the damage is limited and minor, the tree will recover. A persistent sapsucker may choose to feed on a given tree repeatedly, which can cause damage that is more extensive and leave the tree vulnerable to other problems such as insects or decay fungi. Occasionally sapsuckers will also cause damage to non-tree items such as wood house siding, but this is not common.

The most commonly recommended control method is to wrap burlap around the affected area to discourage the sapsucker from returning. Sticky repellents applied to the tree bark are also used, as well as hanging bright, shiny objects such as pie tins, streamers, or beach balls as scare devices. These techniques may or may not be effective, and they may just shift the bird’s focus to another part of the tree or a neighboring tree. If the sapsucker appears to favor a specific tree, it may be best to leave that as a sacrifice tree as the bird may then leave other trees alone in favor of this preferred feeding spot.

Sapsuckers, like all woodpeckers, are protected by the Federal Migratory Bird Treaty Act, so a permit would be required for lethal control. For the most part, though, sapsucker damage is just part of living with nature, something to be endured as an occasional inconvenience or even enjoyed as natural wildlife activity.