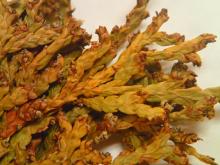 Damage to cypress attributed to the larvae of the cypress tip moth.

Pest description and crop damage The adult cypress tip moth (cypress tip miner) is silver-tan and approximately 0.125 inch long. The larvae are green, about 0.125 inch long. The cocoon is a white, somewhat papery structure made in dead or living foliage. The larvae tunnel in the growing points of the 1- and 2-year-old shoot tips. Damage typically is limited to the tips of twigs. The exit holes are dark and may resemble symptoms of leaf blight, a fungal disease. Foliage does not discolor in the affected areas until late winter. After this, the brown, dead twigs break off readily. Cultivars of Juniperus chinensis, J. virginiana, and J. sabina also are affected. The entire plant can appear brown in a severe infestation, and repeated infestations cause dieback.

Biology and life history Adult moths appear on plants around May-June. Eggs are laid on the shoot tips of host plants. The larvae tunnel under the leaf scale and feed on the foliage until the following spring. Larvae leave the mines and spin a white cocoon in which they pupate in spring. They have been found emerging and spinning cocoons in mid-April during 2004. Adult moths emerge from early May until late June with a peak in late May and early June. There is one generation a year.

Hosts and Pests of Nursery Crops