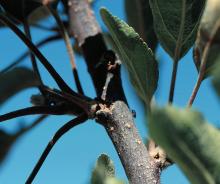 Pest description and crop damage Shothole borers, also known as ambrosia beetles, are small beetles that were introduced to North America and have been found in the PNW since the early 1900s. Apple, pear, cherry, and plum all are attacked. Borers are primarily a problem on injured or stressed plants, but healthy trees growing adjacent to blocks of neglected trees are attacked. The adult shothole borer is a brownish black beetle about 0.08 inch long. The larvae are white, legless, and about 0.17 inch long. The other shothole borers are smaller-about 0.12 inch long, dark brown or black, and covered with yellowish hairs. The larva is pinkish-white, legless, cylindrical, and 0.17 inch long when mature. Larvae and adults of both these species bore into the cambial and vascular tissues of trees, weakening them and causing wilting and dieback of individual stems and branches. Trunks and branches can be riddled with galleries.

Biology and life history Shothole borer overwinters as a larva burrowed beneath the bark of infested trees. They pupate beneath the bark. Then adults emerge in spring or early summer, mate, and fly to susceptible trees to feed at the base of leaves or small twigs. The adults tunnel into the tree, excavating galleries parallel to the wood grain. They lay eggs along the gallery. The eggs hatch, and the larvae feed by tunneling at right angles to the main burrow, causing a characteristic pattern of damage. After 6 to 8 weeks, the larvae pupate at the ends of the galleries. Starting in August, they emerge as adults. The many small, round exit holes this creates gives a "shothole" effect. There are two generations per year.

The other shothole beetles overwinter as a mature larva, pupa, or adult in galleries in the tree. When spring temperatures exceed 65°F, the females become active, fly to susceptible hosts, and bore into the tree. Eggs are laid in the gallery, and as they develop, the female carefully tends them and cultivates ambrosia fungus for them to eat. The females usually remove excrement or wood dust from the tunnels, and this, along with the uniform width of the galleries, distinguishes them from other wood-boring beetles. Young adults can be found tightly packed in the galleries in midsummer, where they remain until the following spring. There is only one generation per year.

Scouting and thresholds Examine branches in late spring for holes 0.08 inch in diameter, oozing sap and sawdust. In stone fruits, these holes often are sealed with gummy ooze. Beetles particularly are attracted to unhealthy trees. Adult beetles are highly attracted to ethanol. Grain spirits can be used to mass-attract beetles to simple jar or bottle traps or commercial traps and lures can be used. Lindgren funnel traps with ethanol lures can capture many adults. Sticky cards will also capture adults, and these cards can be baited with ethanol lures to enhance captures. Monitoring should begin early in the spring.

Severe infestations could indicate poor respiration of roots. A common cause of this is poor drainage or excess irrigation. The best management tool is to keep trees healthy with proper pruning, adequate but not excess water, and fertilizer. Healthy trees repel the beetles by plugging borer holes with sap and resins. Remove and destroy infested wood on the tree or piles of infested green wood nearby, especially cherry wood. Beetles also can attack young trees adjacent to piled wood from an old orchard. Burn or remove old, piled wood before replanting. Once the bark on cut wood dries and sloughs off, it is no longer a host for the beetles. Whitewash trunks of young trees to prevent sunburn and reduce potential hazard of attack by shothole borer and flathead borers. Mass trapping may help reduce local populations.

The best control is preventative. Choose good planting sites, and maintain healthy trees through adequate, but not excessive irrigation, fertilization, and pruning practices, as well as proper sanitation (remove weak or diseased wood).

No effective insecticides are labeled for these pests for apples.