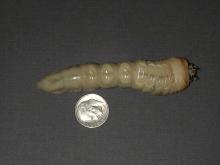 The grub of the California prionus beetle, Prionus californicus, feeds on the roots of perennial crops including hops and landscape shrubs. 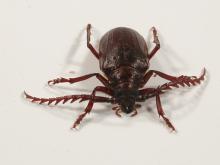 The California prionus is a Cerambycid beetle that can measure from 3.0 to over 5.0 centimeters long. 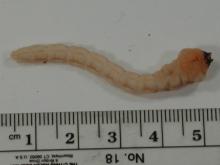 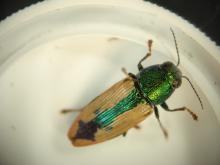 Pest description and damage Adult buprestid woodborers are oblong beetles, usually less than one-inch long, and often with an iridescent sheen to their wing covers. Adults may feed on flowers or pollen. Adult longhorned woodborers are long, slender beetles ranging from 0.5 to over 4-inches long, some with antennae longer than the beetle itself. They may have colorful markings and be found on flowers where they graze on the pollen. Both families of beetles are attracted to dying and dead trees. Hence, damage is secondary to the decline of the host, as woodborers help breakdown the wood. These borers, as larvae or grubs, may spend several years feeding within the wood before emerging as adult beetles. Weevils such as the poplar-and-willow borer can be destructive to willow and poplars. Willow trees are weakened severely by the internal galleries made by the larvae as they tunnel and feed within the wood. Many of the borers allow fungus to enter when the adult lays eggs, further assisting decomposition. Lepidopteran woodborers include carpenterworms and clearwing moths whose larvae tunnel and feed in wood as well. Occasionally woodboring adults may emerge from firewood brought indoors. In forestry, these woodborers are serious pests as they can cause considerable damage to timber waiting to be milled. Larvae damage the wood by boring and feeding through the wood and leaving large rounded or flattened holes as they exit the host. This damage destroys the integrity of the wood and reduces its usefulness and value as lumber.

Biology and life history The moment a tree is cut, it is an attractive food source for these insects. Depending on time of year and temperature, these insects will arrive within hours of a felled and dead/dying tree. Life cycles are variable with the species of insect. Some insects spend many years inside the wood environment. The golden buprestid may feed for up to fifteen years in wood. Adult emergence occurs when the larvae have eaten enough nutrients to develop fully and can transform to the pupal stage. The quality of wood influences that timing. In some cases, healthy trees are attacked, but usually trees are in a stressed or weakened state and unable to defend themselves against the insects.

Pest monitoring Look for cracks or irregularities in bark, water soaked areas, holes with running sap or sawdust frass oozing out. The base of a tree may be covered with granular sawdust mixed with sap. Limb breakages may occur because of weakened wood strength. To determine which species of insects are attacking the trees, the simplest method is to place sections of infested wood, or branches, in a garbage can modified to be an emergence chamber. Cut holes the size of pint canning jars so that the jar ring can be pushed into the hole. Then the jar is screwed in place. When the insects emerge, they usually go to the light in the jar and trapped there until the jar is removed and the insects identified. This method also traps parasitoids that may have been living in, on, or with the pest.

Remove the bark to reduce egg-laying sites for those species that lay eggs in bark crevices. Remove dead and dying wood so populations do not build up and spread to healthier trees. Keep trees watered during drought and reduce soil compaction by foot traffic and autos driving beneath the canopy of trees. Whitewash trunks of young trees to prevent sunburn and reduce potential hazard of attack from flathead borers. Check buried roots on unthrifty perennials for damage due to construction, landscaping and bulldozing.

Several predators and parasitoids can reduce survival of woodborers. Pheromone traps may be deployed to draw in woodborers adults. The larvae and adults also serve as food to birds, raccoons and other animals.

Not recommended for home landscapes. Minimize the use of broad-ranged pesticides that may kill off beneficial insects.