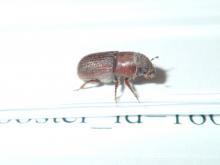 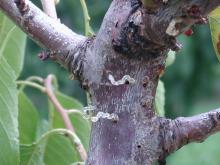 Pest description and damage Bark beetles are small (0.2 to 0.25-inch long), cylindrical dark-colored beetles that attack and bore into weakened branches of landscape trees and shrubs. They are pests of forest trees, ornamental shade and fruit trees, and shrubs. These beetles are primarily a problem on injured or stressed plants, but they may attack healthy plants growing adjacent to infested plants. Mature larvae are white, legless, 0.125 to 0.25 inch long that tunnel and feed within the inner bark of trees. Larvae and adults of these species bore into and weaken the cambial and vascular tissues of trees causing wilting and dieback of individual stems and branches. Trunks and branches become weaker with numerous beetle galleries. In worst cases, bark beetles can transmit diseases that then colonize and kill the host tree while the beetle feeds on the fungus.

Biology and life history Most bark beetles overwinter as mature larvae, pupae or as adults in wood galleries or 'engravings' beneath the bark of infested trees. In response to warming spring temperatures, bark beetles emerge as adults, fly to susceptible hosts, and bore into buds, twigs and trunks of host trees. After mating, female bark beetles lay small, oval whitish eggs along freshly made tunnels beneath the outer bark. As the eggs hatch, the larvae mine galleries that radiate out from the egg-laying tunnel. These galleries fill with frass and increase in diameter as the larvae grow. When mature, the larvae pupate in the galleries. The adult beetles tunnel their way out leaving circular exit holes in the bark, giving the outside surface of an infested branch or trunk a "shothole" appearance as multiple beetles exit from the host. Most bark beetles have two generations per season, but a few complete only one generation each year.

Pest monitoring Examine branches in late spring for holes that are 0.08 inch in diameter, oozing sap, and sawdust. In stone fruits, these holes are sealed with gummy ooze accompanied by a sawdust-like frass created by the larvae. Beetles are attracted to unhealthy trees and damaged tissues. Check for a small hole at the node or base of a bud or bud scar on sickly branches. Monitor bark beetles by hanging pheromone traps. There is potential to attract adult bark beetles into an area so do not place these traps on potential hosts.

The best management strategy is to keep trees healthy with proper pruning, adequate water, and fertilizer. Healthy trees can fight off the beetles by plugging entry holes or washing out invading beetles with sap and resins. Remove and destroy any infested wood on the tree and do not pile infested green wood, especially cherry wood, in your home landscape. Once the bark dries and sloughs off, cut wood is no longer a host for the beetles. Whitewash trunks of young trees to prevent sunburn to smooth bark and thus reduce potential attack by shothole borer and other bark beetles. Sticky adhesive products applied to the trunk may be effective.

There are a number or parasitoid wasps, predatory beetles and other insects that prey on bark beetles. Birds, especially woodpeckers, will scavenge up and down the bark surface to feed on emerging beetles.