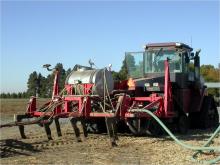 Fumigants can be injected into the soil on shanks usually at 18 inches depth depending on the crop.

Pathogenic soil organisms present in the soils of most mature orchards often damage the roots of young fruit trees when the site is replanted. Poor root development leads to reduced vegetative growth and poor fruit yields throughout the life of the replanted orchard. This effect is especially common in north-central Washington, but is being recognized as an increasing problem in other regions. Replant disease is most common when apples, cherries, or pears are planted after apples, pears, or cherries; however, it seems that almost any woody perennial crop is affected when planted after any other woody crop. Changing from apples to cherries will not help you avoid this common problem. Growers have reported significant tree growth response on many sites when they fumigate between the removal of an apple orchard and the planting of cherries. Even wine grapes grow relatively less well when planted into recent orchard sites.

Certain soil fumigants have controlled the specific orchard replant disease when properly applied. The positive effect of controlling this disease can be measured the first season, and even 20 years after treatment.

There are no soil treatments that will effectively control replant disease problems after planting. Nonchemical control options include a 5-year (or more) rotation out of orchard (removing most of the tree roots the first year), or the replacement of soil in the planting hole with good quality soil from a non-orchard source. To be effective, the soil replacement should fill a planting hole 7 feet across and 2.5 feet deep. Of course, soil replacement is not at all practical on a large scale. Using less soil in smaller planting holes helps the trees grow somewhat better the first season or two, but the effects of replant disease soon become evident. You have a bigger sick tree.

The most promising new development is the discovery of replant disease tolerance in some of the Geneva series rootstocks, which may lead to more success in fully recovering the productivity of otherwise great fruit production sites. It is likely that the combination of an effective fumigation and the tolerant rootstock will perform better than either technology alone to manage orchard replant disease.

There is no apparent tolerance of replant disease in any available cherry or pear rootstock.

There is a strong interaction between the quality of the soil, management (irrigation, fertility, and weeds) of the young orchard, and preplant treatment relative to replanting success. Even with good overall management of the planting, you will only have “fair” reestablishment of an orchard with poor soil quality.

Unfumigated orchards are usually difficult to manage when young, and take several extra years to break even, if they ever do. If you are not absolutely certain that replanted trees grow very well in your orchard, you may skip a $500–700/acre procedure and suffer a $40,000/acre reduction in gross returns over the next 10 years.

While many soil fumigants, fungicides, fertilizers, and soil amendments have been tested for effect on the orchard replant disease, only three have shown long-term growth and yield benefits in Washington orchard trials: methyl bromide, metam sodium (or metam potassium), and fumigants containing 1,3-dichloropropene + chloropicrin mixtures. The other treatments may help early tree growth, but the effect of replant disease can be seen during the second or third leaf, resulting in slightly larger, but sick, trees.

Most fumigants must be custom applied, as special equipment and skills are required, but some may be applied by a certified private applicator. New regulations about fumigation, phased in from 2009-2010, make the application of fumigants by anyone other than a licensed professional very difficult. If you are unfamiliar with the fumigant product you wish to personally apply, pay special attention to use and safety information prior to purchasing. Used improperly, fumigants can be quite hazardous to the applicator and the crop, and will not effectively control orchard replant disease. Some application options described on fumigant product labels have not resulted in replant disease control, so closely follow the label methods that have proven successful in Washington orchards, as described below.

Follow soil temperature and preparation guidelines on the product label. Since we are usually trying to fumigate in the late fall after harvest, or in the early spring before planting, we may not have optimum soil conditions when we get ready to fumigate. Fumigants are more effective if the soil is not at the bare minimum of condition at the time of application. In general, colder, wetter, and finer textured soils retain fumigants longer. The soil is usually in best condition for fumigation in October and early November, and in April or later in the spring. In the fall, treatment should be completed well ahead of the time that soil temperatures drop below the minimum recommended on the label.

It is far better to plant later than usual in spring than to risk tree damage by planting while fumigant residues remain in the soil. Skipping fumigation because it sets back the planting date is a poor choice. A tree planted in May in fumigated soil usually outperforms a March-planted tree suffering from even a mild case of replant disease. Long-term productivity should be the main concern, not date of planting.

Fumigants are safe and effective when properly used, but special training is highly recommended for first-time users. Having used other pesticides or fumigants does not qualify as adequate user experience because each fumigant has unique properties. Before using any fumigant, carefully read and follow safe handling and protective equipment information on the label. Special respirator canisters and vaporproof eye protection may be required.

Chloropicrin was the first soil fumigant found to effectively reduce the severity of replant disease. Its use is relatively new in orchards only because properly designed custom application equipment was not available in most areas until the past decade. This product moves not much more than 9 to 12 inches from the point of injection, so it must be custom applied with special equipment. A large volume of the trees’ future root zone must be treated to assure long-term benefits. Therefore, the application equipment must apply the product in a manner that assures that the future tree row is treated in a band at least 7 or 8 feet wide and 2 to 3 feet deep. For modern apple planting systems with close row spacing, there can be no banding, just broadcast.

This product, at least for the immediate future, can be applied by the certified private applicator. Since it is somewhat difficult to apply correctly, there are numerous ways the application can be done incorrectly, leading to poor results. The most common mistake is the overapplication of water when applying. Read and follow directions carefully.

Originally sold as Vapam, this product is now also available under several other trade names, including: Soil Prep, Nemasol, Metam Sodium, and Busan. The potassium form is sold as K-Pam. Metam, a water-soluble liquid, is moved by irrigation water into the zone of the soil that you wish to treat. After the fumigant/water mixture stops moving downward in the soil, the metam converts into a more toxic fumigant gas (methy-isothiocyanate). This gas moves only a few inches from the zone treated with the water mixture. Since the active ingredient moves only a short distance, it is critical that the metam/water mix penetrate the future tree root zone 2.5 to 3 feet, but no more.

Before application, soil should be 45°F to 65°F, and relatively moist (over 85% of field capacity). Pre-irrigate the field if the soil is even moderately dry. Use approximately 0.5 to 1 inch of sprinkler irrigation water to drive the fumigant to the desired depth. Without immediate incorporation with water, the product will evaporate rapidly, creating a drift and applicator hazard.

Overapplication of water during application will overdilute the product in the soil and greatly reduce the fumigant effect. Your goal during application should be to drive the product in no less than 2 feet, but no more than 3 feet. Sandy, wet soils require the lesser rate of water; finer textured, plowed or ripped, and drier soils require the higher amount. Measure the irrigation system application rate to determine the hours of irrigation that will apply the proper amount of water. Most systems should be run 2 to 5 hours during the application process.

It is not always practical to work the orchard soil prior to treatment. If the soil is prepared for planting after treatment, do not mix untreated soil into the fumigated area.

Note: Metam sodium products have a number of application methods on their labels. The long-term practical and effective treatment methods for orchard replant disease involve driving the product into the soil with sprinkler irrigation water. There are some commercial applicators who have specially designed equipment that applies metam into the soil by shank. Results are reported to be very promising. Rototilling the product into the soil or filling planting holes with large volumes of water mixed with a per-site rate of the fumigant has not been effective on sites with moderate to severe replanting disorder. If you do not have sprinkler irrigation available at the time of application, this product is not recommended. Application in the fall of the year before water systems are shut off is the most practical approach. The fact that water comes into irrigation systems late in the spring will set back your planting date. Planting late is far better than not fumigating.

Early fall treatment will allow you to plant the treated site in late winter or early spring. If fall weather or lack of irrigation water postharvest delays treatment until spring, label instructions require 30 days to pass between treatment and planting. The site and soil can be prepared for planting starting 10–14 days after treatment. Digging planting holes or disturbing the soil a few days prior to planting speeds the release of fumigant residues that may remain. Nontoxic, but unpleasant sulfurous odors may remain in the soil for several weeks after treatment.

Note This product is being phased out, and is now difficult to purchase.