Confirmed to have RBDV and notice the poorly formed fruit. 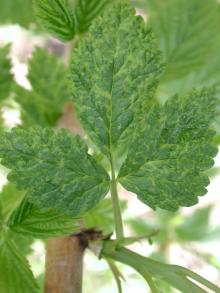 Cause There are several important virus diseases of raspberry and black raspberry in the Pacific Northwest. Pollenborne viruses include Raspberry bushy dwarf virus and Strawberry necrotic shock virus(SNSV). SNSV is common but symptomless in field-run 'Munger' and 'Boysenberry'. SNSV will spread from infected 'Boysenberry' to immediately adjoining red raspberry rows, where it causes no obvious symptoms or crop loss. This virus is transmitted by thrips in strawberry and there is some evidence it can be transmitted by thrips to Rubus spp. since there can be low levels of transmission in plants that are not flowering. It can be detected serologically or by RT-PCR.

Several viruses are spread by aphids. The Raspberry mosaic virus disease complex, composed of five different viruses, is transmitted by the large raspberry aphid. It is more common in Washington than Oregon. 'Canby', 'Chilliwack', 'Comox', 'Nootka', and 'Skeena' are resistant to the vector aphid's colonization. A new biotype of the aphid appeared in the late 1990s that overcomes the resistance used in the British Columbia breeding program. The impact of this new aphid biotype is yet to be seen, but it is expected to be more important in Washington than Oregon. Raspberry leaf mottle virus (RLMV) and Raspberry latent virus (RpLV) are aphid-vectored and involved with RBDV in the crumbly fruit disease. RLMV is considered the most widespread virus on raspberry in the PNW.

Symptoms Crumbly fruit is characterized by the abortion of many drupelets which causes the fruit to crumble at harvest, resulting in significant reductions of yield and fruit quality. Reduced plant growth and leaf patterns may also occur.

Ringspot symptoms vary from mottled, chlorotic, mosaic leaves to leaf curling and ring spotting. Infected plants often show no symptoms but have low vigor and yield. In the case of Tomato ringspot virus, young leaves on primocanes often show a chevron pattern and ringspot early in the season.

Black raspberry decline is initially displayed as leaf chlorosis and puckering. Eventually, the fruiting canes prematurely die back, resulting in rapid and severe reduction in yield.