Confirmed to have RBDV and notice the poorly formed fruit.

Virus infected plants on the left and healthy on the right. First fruiting year after planting of 'Meeker' red raspberries.

Note the yellow areas between the veins on the center leaf. 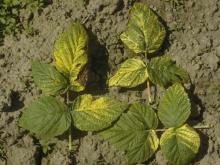 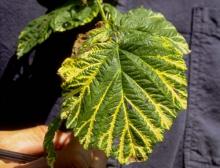 Bright yellow areas along the main veins of the leaf give a "network" appearance to the leaves.
Dept of Horticulture, OSU

Cause A virus complex consisting of Raspberry bushy dwarf virus (RBDV) and Raspberry leaf mottle virus (RLMV), Raspberry latent virus (RpLV), and/or Black raspberry necrosis virus (BRNV). The cultivar Meeker had more severe growth reductions when infected by RBDV and RLMV; whereas crumbly fruit was more prominent when infected by RBDV and RpLV or three viruses together (RBDV, RLMV, and RpLV). RBDV is spread by pollen while the others are aphid-vectored. RLMV spread rate is much higher than that of RpLV, which needs a 6 to 7 day period in the aphid to become transmissible.The disease can be found on many red and black raspberry cultivars as well as 'Boysenberry', 'Loganberry', and 'Marionberry' blackberries. Entire fields may become infected with the virus within 3 to 5 years of planting, depending on inoculum pressure from adjacent fields. The fruit from infected plants often will not make IQF grade and is sold as a lower value produce for juice, jam or puree. Since pollen is infected with RBDV honeybees play an important role in moving infected pollen from plant to plant.

Symptoms The virus complex may not produce symptoms on the foliage of many cultivars but may cause crumbly fruit as in Meeker. Many drupelets abort, which causes the fruit to crumble at harvest or postharvest during IQF freezing, resulting in significant reductions of yield and fruit quality. On 'Puyallup', bright-yellow areas along the leaf's main and smaller veins give the leaves a "network" appearance. Severely affected leaves are almost completely bright yellow. In some red raspberry cultivars, faint ring and line patterns develop on leaves. The disease reduces cane growth and fruit yield in 'Meeker' and 'Canby' red raspberry but the major impact is a reduction in fruit quality. In the black raspberry 'Munger', both reduced growth and crumbly fruit occur. Though many cultivars are symptomless when infected with only one of the viruses, 'Autumn Bliss' develops bright yellow leaves and crumbly fruit when plants are infected with RBDV alone. As far as is known all blackberries are symptomless when infected with any one of these viruses, thus can serve as inoculum sources for new fields planted nearby. In blackberry, RBDV in mixed infections with BRNV and/or Blackberry calico virus can cause drupelet abortion and misshapen fruit, though it has been much less of a problem in blackberry than in red raspberry.