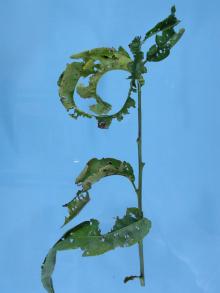 Peach with tattered leaves due to X-Disease. 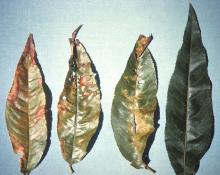 This slide is labeled Hale peach from The Dalles with western X disease." 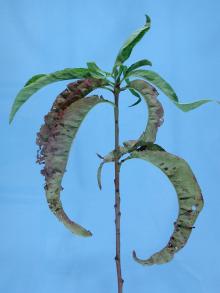 Tattered leaves due to X-disease.

Cause A phytoplasma that is east of the Cascade Range and is spread by four leafhopper species, of which the most important is the geminate leafhopper, Colladonus geminatus. Sweet and sour cherry also are susceptible to this organism. Candidatus Phytoplasma pruni is the suggested scientific name for the X-disease phytoplasma. Fruit quality and yield are reduced.

Several Prunus species are hosts including cherry, plum, bitter cherry and choke cherry. There are many similarities with Peach yellows phytoplasma and Peach rosette phytoplasm, both of which are quarantined against being brought into the PNW from Eastern States.

Symptoms Near the end of May, a few leaves show an irregular yellow spotting, which later may turn reddish or brown. Leaves tend to roll; infected tissue becomes necrotic and ultimately drops out in a rather ragged or shothole pattern. As the season advances, foliage from the stem base up shows these symptoms and drops to the ground; only young growth remains at the branches' tips. Spread appears to be from limb to limb throughout the tree. Fruit is smaller, lacks flavor, and may shrivel prematurely. Trees typically die in 4 to 8 years. Easily confused with the pear decline phytoplasma which causes peach yellow leaf roll.