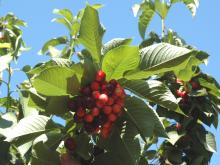 It is common to have what look like ripe cherries among unripe cherries with X-disease. All have poor flavor and brix development.

These cherries were positive for phytoplasma. 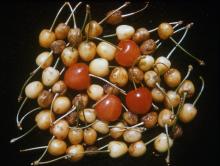 This disease is also called albino. Note the 4 healthy 'Royal Ann' cherries among the infected fruit.

Cause A phytoplasma sometimes called cherry buckskin in California or albino in Oregon. Candidatus Phytoplasma pruni is the suggested scientific name for the X disease phytoplasma. X-Disease can be transmitted by budding or grafting, but because the disease is unevenly distributed in the tree, a fair number of buds will not carry the organism. Bud wood held in storage frequently will not transmit the disease. Leafhoppers spread the organisms in the orchard; Colladonus geminatus and C. reductus are the most common vectors. Leafhoppers positive for the X phytoplasma are most active in the spring and late summer into fall. There is a 1-month latent period between leafhopper acquisition from diseased trees and transmission to healthy trees. Attempts to control the disease's spread with insecticides for leafhopper control have been unsuccessful. Infected trees may not show symptoms for two years but can still be a source of inoculum for healthy trees during that time. Suckers that emerge from stumps after cutting down the tree can still retain the pathogen and be a source of this disease. Attempts to control the disease's spread by removal of symptomatic branches one at a time is also unsuccessful.

X-Disease has not been reported in the Willamette or Hood River valleys of Oregon but was widespread in Wasco County and found in Umatilla and Malheur counties. The disease has been found in several eastern Washington locations and has increased in incidence in the 2010's.

Several Prunus species are hosts including peach, plum, bitter cherry, and choke cherry. Infected peach and nectarine orchards could be sources for nearby cherry orchards. Although tumble mustards, flixweed, and puncture vine have also tested positive for X-disease phytoplasma, they are not regarded as significant hosts threating commercial orchards. Japanese plum (P. salicina) is also host.

Symptoms Fruits are small, pointed, often flat-sided, and pale-red to greenish-white. Normal appearing fruit may be interspersed with affected fruit. Fruit lack maturity, flavor and/or sugar development. Affected fruit often is confined to a small portion of the tree; the rest of the tree bears normal fruit. Leaves on terminals are slightly rosetted and become bronze or rusty several weeks earlier than healthy trees. A late growth flush may develop from normally dormant buds. In sour cherries, older infected twigs and branches may have considerable dieback. The albino strain is not known to go to peaches. Cherry on Mahaleb rootstock develops pits and groves between the scion and rootstock, forming a dark line under the bark.

Sampling Sample fruit stems and/or woody tissue starting a week before harvest for either viruses or phytoplasmas. Although Little cherry virus 2 can be detected in all tissues of the tree all year around, X-disease, which causes similar symptoms, is best sampled at harvest. Take four 5-inch cuttings including leaves and fruit stems from symptomatic limbs. Early detection will aid in management of these diseases.

Cultural control Remember the grower mantra, "When in doubt, cut it out." Aggressive scouting, sampling, and tree removal is critical for slowing spread of little cherry diseases.