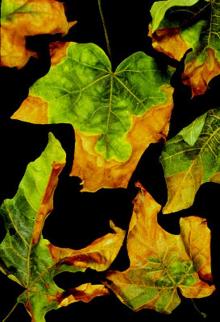 Necrotic areas typically apear on the margins and tips of leaves.
Photo by Ralph S. Byther 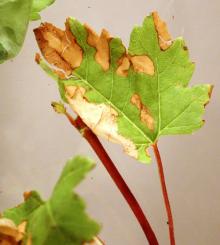 Necrotic areas are near the margin and between the veins.
Melodie Putnam, 2009.

Bigleaf maples in this area all had leaf scorch symptoms through out the tree especially on sun exposed leaves.

Cause Drought or heat stress may cause leaf scorch. In general, there is not enough water reaching the leaf margin to keep up with transpiration. An interruption of the vascular system, as with cankers or squirrel damage, can also produce these symptoms. Or, too much salt (from over-fertilization) has been translocated to the leaf margins. Poorly installed trees with lack of root establishment can also result in the same symptoms and may be referred to as transplant shock. In the Southeastern United States, the bacterium Xylella fastidiosa has been associated with these symptoms in red maple, elm, oak, and sycamore. Based on periodic testing, this bacterium has never been found on maple trees with scorch symptoms in the PNW.

Symptoms Leaf margins and areas between veins turn brown. Twig dieback may follow. Symptoms can be severe in eastern Washington when bright, hot days follow cool, moist weather during leaf emergence. Sun or heat related stress will occur primarily on the south side of plants.

Cultural control Prevention is the key as there is no remedial action that can be taken once leaves are scorched by the sun, but effects are not fatal and new leaves will eventually cover damaged ones.

Chemical control Use before hot summer weather. Always follow pesticide label directions. Anti-transpirants or anti-desiccants are not recommended since they have not been shown to be effective at preventing heat or cold-induced desiccation of plants beyond their normal adaptations.