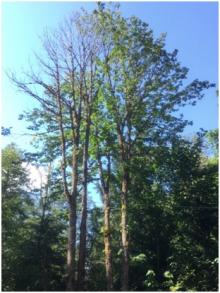 Cause Unknown. Forest pathologists have been investigating a new decline and dieback of bigleaf maple that emerged in 2010. The problem is widespread throughout western Washington and Oregon and may extend into California. Many pathogens have been ruled out as the primary cause (but may be involved in secondary symptoms) including Armillaria, various oomycetes, Nectria cankers, stem decay fungi such as Ganoderma, and Verticillium. Testing for the bacterium Xylella fastidiosa has been negative. Abiotic factors, such as drought, are possible but none has emerged as the definitive cause.

Leafhoppers may be heavily involved with Empoasca elongate as the primary insect. This is a native leafhopper on bigleaf maple and is a relative of the potato leafhopper, Empoasca fabae, which causes a great deal of damage to field crops in the Eastern US. The saliva of the potato leafhopper mechanically injures host plant cells that transport water and nutrients, causing "hopperburn." E. elongata appears to be causing similar damage in bigleaf maples with water stress playing an important role in exacerbating the damage.

Symptoms Crown, branch, and entire tree dieback with clumps of shrunken leaves in the canopy and heavy seed crops. Trees of many ages and sizes have died from this disease. Additional symptoms may include leaves with yellow edges and red-to-brown tips typical of leaf scorch.

Cultural control Maintain trees as best you can with minimal care and infrequent deep waterings during the summer months while forest pathologist scratch their heads.