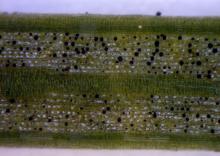 Note the round, black pseudothecia blocking stomates on this Douglas-Fir needle. 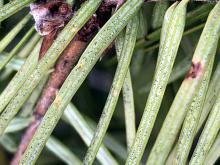 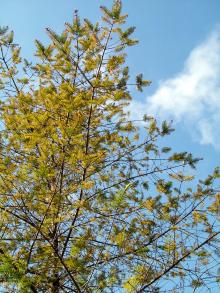 Discoloration and needle loss in spring.  Most branches have less than one year needle retention in this photo. 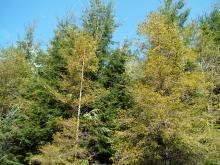 Note the green spruce and hemlock in the background, contrasting with the yellow Douglas-Fir with Swiss needle cast.

Cause Nothophaeocryptopus gaeumannii, a fungus found on trees of all age classes from natural forests to ornamental landscapes. This disease is considered one of the top threats to Douglas-fir plantation health and productivity in western Oregon, Washington and SW British Columbia. Mortality is rare, but premature loss of foliage reduces growth in forest plantations, as well as in Christmas trees and in nursery stock, so that this disease can impact aesthetics, crown fullness and color, and overall tree health. The most important problem is on Christmas trees where needle quantity and quality determines saleability. The disease probably is native to the Pacific Coast but was first described in Switzerland, hence the name Swiss needle cast. Douglas-fir is the only known conifer host.

The disease became a forest problem during the 1990s in the coastal-fog zones of the northern coast range of Oregon where Douglas-fir has been planted beyond its normal range. Native and naturally regenerated stands also have severe disease development. The most heavily infected areas are around Tillamook County, Oregon up to 24 miles from the ocean. Forests from Bandon, OR to the Northern Olympic Peninsula of WA have symptoms visible from aerial surveys. Hazard zone research has shown that variables associated with increased moisture (such as fog, rainfall, and altitude), warm conditions (such as temperature during the winter), and lack of excessive heat in the summer correlate with higher disease severity. The disease is estimated to reduce mean volume growth in severe situations by 23% to 52%.

Spores produced in spring infect through the stomata of young, rapidly expanding shoots. Cool, rainy weather in spring is conducive to disease development. Symptoms and fruiting bodies of the fungus (pseudothecia) are not produced until the next spring. Production of pseudothecia was related to winter mean daily temperature and spring cumulative leaf wetness. The fungus appears to live as an endophyte within the needle and only causes disease when pseudothecia clog stomates on the underside of the needle. Needles are typically lost after 25% of the stomates are plugged.

Symptoms Infected needles usually turn off-color (light green to yellow to brown) and are prematurely cast in early spring. Needles may yellow only at the tips or be generally speckled yellow over the entire length. Current-year needles do not show symptoms. Some trees will retain infected needles and show no symptoms. Diagnostic signs are rows of black pseudothecia (pinpoint-size fruiting structures) on each side of the midrib on the lower needle surface. A hand lens is helpful in distinguishing these structures from sooty mold. Pseudothecia are most prevalent on needles 1 year old and older. Severely infected trees have only current-year needles. When displayed indoors as Christmas trees, infected trees dry out twice as fast as healthy ones.

Diagnosis solely based on visual symptoms is not able to distinguish Swiss needle cast from needle casts due to Phytophthora pluvialis.

Cultural control Silvicultural techniques, such as thinning and vegetation management, have been shown to have no impact on disease severity on forest trees, but will influence stand development and individual tree growth. Cultural tactics combined with chemical management are effective in Christmas tree and nursery settings.

Chemical control Fungicides are not needed the first few years a Christmas tree is in the ground. Begin spraying 3 years before harvest. If needed, apply once when new spring growth is 1 to 2 inches long. Considering normal spring weather in the Pacific Northwest, it is better to apply fungicides a little early than too late. Although effective, the environmental and economic costs are too high for fungicides to be used in the forest setting. If used in the forest for a few years and then terminated, the disease will return to pretreatment levels within 2 to 3 years.

Note Some research has shown that high rates of micronized sulfur can reduce the level of this disease on Douglas-fir needles. In some cases the level of disease control in the first year was similar to that obtained with chlorothalonil but not as good in the second year. The use of sulfur is not recommended at this time