Leaves may scorch before falling from the tree.
Photo by Rich Regan, 2002. 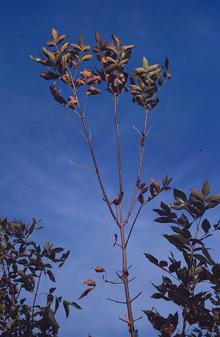 Defoliation may be observed without other symptoms.
Photo by Rich Regan, 2002.

Cause Verticillium dahliae, a soilborne fungus that, once established in the soil, is almost impossible to eradicate due to microsclerotia that germinate and infect roots. The fungus grows into the xylem where it colonizes the plant through mycelial growth and conidial production. Fluid movement in the xylem passively transports the conidia. Once in the xylem, this fungus partially blocks water movement and produces toxins that result in wilt symptoms. After diseased plant parts die, microsclerotia form and live several years in soil. Many weeds are susceptible and can help the fungus survive and disperse.

Symptoms Ash rarely produces the wilting and vascular discoloration common to other hosts such as maple. Foliage turns light green and chlorotic followed by a leaf scorch and premature defoliation. Older leaves seem to defoliate first, according to observations from local nurseries. Upper branches die back in a random or one-sided distribution on the tree. Branches tend to die back in summer after the first heat stress of the year. Trees infected in the nursery often develop symptoms within 1 to 3 years after planting but can remain symptomless for longer periods. Symptom expression will vary in intensity from year to year. Send samples to a laboratory for accurate diagnosis.

Chemical control Fungicides are not effective.