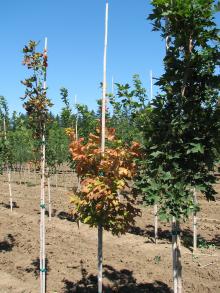 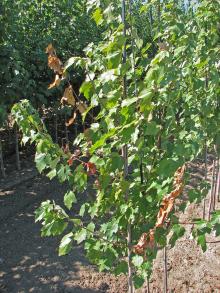 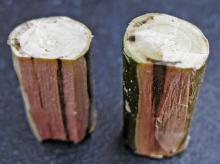 Vascular discoloration of vine maple (bottom right) caused by Verticillium wilt. Note how the discoloration occurs along the direction of the grain and appears as a circular or semicircular pattern in cross section.

A cross section of the stem will show vascular discoloration in rings or arcs as can be seen in the stem on the right. 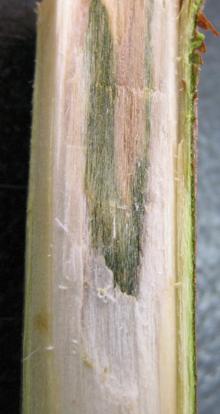 Verticillium Wilt in the Pacific Northwest

Cause Samples with Verticillium wilt have dominated the maple problem diagnoses sent to the OSU Plant Clinic. Verticillium dahliae, a soilborne fungus that is almost impossible to eradicate once established in the soil. There are over 300 plant species susceptible to this fungus. It forms microsclerotia that germinate in response to exudates from roots that are growing nearby. Mycelia from the microsclerotia infect the roots. The fungus grows into the xylem where it colonizes the plant through mycelial growth and conidial production. Fluid movement in the xylem passively transports the conidia. Once in the xylem, this fungus partially blocks water movement and produces toxins that result in wilt symptoms. The cambium may die, resulting in an elongate canker, which can be colonized by other pathogens such as Nectria sp. and Cytospora sp. Current-season sapwood may not be infected, and symptoms may not reappear; or infection may occur without foliar symptoms. This may result in branch dieback or bud failure in spring.

After diseased plant parts die, microsclerotia form inside the tissue. Once the infected tissue decays, microsclerotia are released and can survive several years in soil. Many weeds are susceptible and can help the fungus survive and disperse. Plant-parasitic nematodes also can increase Verticillium wilt incidence and severity. Other diseases, such as bacterial dieback, can also increase in incidence and severity on trees with Verticillium wilt. The Norway maple cultivars Jade Glen and Parkway are tolerant and have few symptoms.

Symptoms Leaves on one side of the tree or on just an individual branch suddenly wilt and die. Leaves are yellowish and smaller than normal. Leaf scorch can also occur at leaf margins. Leaves die and fall or hang on dead branches. Later, other limbs wilt and die. Greenish streaks or bands that follow the grain can be found in sapwood but perhaps not in the earliest stages of infection. In cross sections of the stem, vascular discoloration will appear in rings or arcs. Vascular discoloration is more likely to be found in larger branches and trunks. Infected trees may die within a few weeks or live for years.

Chemical control Research in California and Florida has not identified any nonfumigant chemicals or microbial based products that provide consistently effective control of Verticillum wilt of strawberry.

Note Although Phyton 27 is registered as a spray it is not recommended based on a single trial where it was ineffective when used before or after infection.