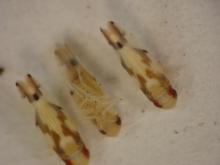 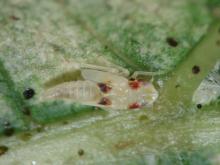 Pest description and crop damage Adult western grape leafhoppers (WGLH) and Virginia creeper leafhoppers (VCLH) are about 0.12 inch long and are pale yellow with reddish and dark brown markings. VCLH can be distinguished from WGLH by red spots on the back behind the eyes. The short life cycle of both leafhopper species enables them to increase populations rapidly.

Leafhopper adults and nymphs pierce leaf cells and suck out the contents. Each feeding puncture leaves a white spot. As injury increases, photosynthetic activity declines; heavily damaged leaves turn yellow and brown and fall off the vine in severe cases.

Biology and life history Grape leafhoppers overwinter as non-breeding adults in plant debris and leaf litter in protected locations. Adults emerge from overwintering sites in March and feed on annual weeds on the vineyard floor. They move on to grape foliage after budburst, and females begin laying eggs usually in late April. Egg-laying continues for about 6 weeks.

Sampling and thresholds The relationship between leafhopper populations and economic damage to wine and juice grapes is not well understood in the Pacific Northwest, but it is clear that vines can tolerate large populations before suffering economic loss. This is particularly true for spring populations of overwintered adults and first generation nymphs, which confine their feeding activity to the basal six to eight leaves.

The second generation of nymphs moves onto outer canopy leaves. Their numbers should be assessed using leaf counts. An average of more than 20 nymphs per leaf on outer canopy leaves, with no evidence of egg parasitism, is likely to require treatment.

Several generalist insect and mite predators prey on leafhopper adults and nymphs of all stages. Among the most abundant are lacewings, predatory bugs, predatory beetles, and spiders. The most important natural enemies of grape leafhoppers are microscopic parasitic wasps, particularly several different species of Anagrus. Anagrus wasps parasitize leafhopper eggs and can cause up to 100% mortality in August to September. Anagrus wasps cannot overwinter in vineyards, as they require a leafhopper host that overwinters as an egg. Thus, they take some time to recolonize vineyards during spring to summer, particularly when insecticides are being used.

The presence or absence of wasps should be assessed before making management decisions. The wasps are detected easily by observing the eggs of leafhoppers: parasitized eggs turn brick-red before the adult wasps emerge. Always regard the presence of wasps during the first generation of eggs as a significant mortality factor. Buprofezin (Applaud) is the only insecticide compatible with Anagrus wasps and is recommended.

Disking or tilling soil to remove weeds and vineyard debris in late winter to early spring can reduce populations of overwintered leafhoppers. If maintaining a vegetative cover in the alleyway (grass, weeds, or cover crop), consider mowing early in the season to reduce adult populations. Waiting until after budbreak to mow or till can result in adults moving to the vine foliage.