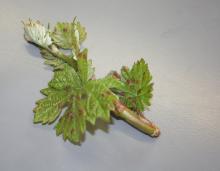 Erineum mite galls can have a pink or reddish coloration on young shoot and leaf tissues in early spring.
Photo by Patty Skinkis, OSU.

Back side of leaf infested with erineum mites. Notice that the galls have a fuzzy brown appearance on the underside.
Photo by Patty Skinkis, OSU 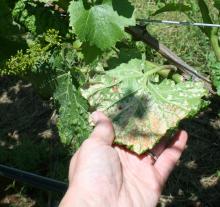 Pest description and crop damage This mite is similar in morphology to the grape bud mite. It is microscopic, wormlike, and white-yellow in color. It overwinters between outer bud scales and bud tissue and feeds on leaves during spring and summer. The upper leaf surface becomes blistered, and the lower leaf surface of the blister appears hairy and white, almost resembling fungal growth. The lower leaf surface turns from a white color early in the season and progresses to yellow or brown later in the season. In severe cases, these mites may in rare instances infest clusters in early spring. Grapevine Pinot Gris virus (GPGV) is known to be vectored by this mite; however, the extent of this virus in the PNW is not yet known.

Biology and life history During summer, colonies of erineum mites live in blisters (erinea) formed by their feeding on lower leaf surfaces. The blisters are comprised of masses of enlarged leaf hairs. These blisters protect mites from natural enemies and direct contact of pesticide sprays. As the population increases, some move to new areas or other leaves and form new erinea. From mid-August until leaf drop, there is a movement from the erinea back to overwintering sites beneath the bud scales.

Sampling and thresholds It is common for erineum mites to be found sporadically throughout western Oregon vineyards in any given year. Typically, increased erineum mites are observed in vineyards where there has been reduced sulfur use. However, this rarely leads to economic problems or crop losses. Currently, there are no damage or management thresholds.

Predatory mites and beetles are important biological control agents of these mites.

Dormant-season oils and insecticides used for other pests and sulfur applications for powdery mildew usually control this pest. Directed controls specifically for erineum mite usually are not necessary.