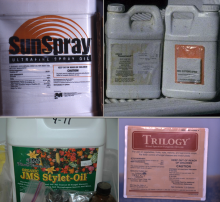 Some of the various oils that are or have been available for commercial use.

Some of the various oil products that are or have been available in small packaging for the home market.

Use caution when using spray program that call for both oil and sulfur. Together they are phytotoxic to plants. These grapes were sprayed with oil and then a leaky nozzle hit them with a sulfur solution resulting in burnt leaves.

While growers have commonly used PSOs to manage overwintering pest populations during the dormant season, they have been reluctant to use them during the growing season because of their phytotoxicity. Improvements in oil refinement technology have resulted in products safer for in-season (warm weather) application.

Most of today’s pest-control PSOs are highly refined. Many can be used throughout the entire season if the label instructions are followed carefully. Paraffin-based oils and refined petroleum distillates account for less than 10 percent of the ‘mineral oils’ and ‘unclassified petroleum oils’ currently used (California Department of Pesticide Regulation 1996). The ‘refined petroleum distillates’ category includes several products that are used as insecticides or fungicides. These products, are more refined and safer to use during the growing season and in warmer temperatures.

In addition to horticultural mineral oils, some registered pesticidal oils are derived from oilseeds such as castor, cotton, and soybean. While such vegetable oils can be quite effective in controlling scales and other insects, they are rarely used, except by organic farmers, because of their potential to cause phytotoxicity. Primarily, these materials are used as refined spray adjuvants.

Horticultural mineral oils have long been used as adjuvants with conventional pesticides (such as insecticides and copper-based products) to improve the level of efficacy of these products. The oils aid in coverage and increase the penetration of insecticides into waxy plant surfaces. Used alone, PSOs kill insects and mites through suffocation by smothering. They are effective in all stages of insect growth, including the egg stage. Horticultural oils will work only if the insect pest is present on the plants. Prophylactic applications are of no use and are not recommended.

PSOs are used for control of black sigatoka of banana, greasy spot of citrus, and have been used successfully for control of powdery mildew diseases on a variety of crops.

PSOs are effective in apple, cherry, cucurbit, grape, peach, rose, and tomato powdery mildew management programs. They are excellent stand-alone fungicides and are useful as companion products in strobilurin and DMI (demethylation-inhibiting) fungicide resistance management programs. PSOs have fungicidal and fungistatic activity, and there is an increasing amount of evidence that they actually boost a plant’s resistance to infection by altering the host physiology. If used in combination with locally systemic fungicides, PSOs will facilitate foliar penetration. PSOs are useful in cherry mildew management programs if their use is restricted to no later than the pit-hardening stage, which minimizes the risk of oil damage to fruit. Oils are also extremely useful in cherry and peach nurseries where disease pressure/resistance risk is extremely high.

On grape powdery mildew, oils showed moderate protection for up to 4 days, excellent pre- and post-lesion curative action, and excellent antisporulant activity (Northover and Schneider, 1996). They are effective in alternation with DMI and strobilurin fungicides. Use of oils exclusively during the growing season had some drawbacks including reduced sugar accumulation in grape and fruit and foliar damage to cherry. Oils are not quite as effective as stand-alone fungicides against apple mildew, particularly when disease pressure is high. They are an appropriate choice in resistance management programs. Regardless of crop, PSOs are usually the grower’s best choice for getting a handle on a mildew problem that appears out of control.

During warm weather, plants should be irrigated prior to PSO application. Sprays should be applied when temperatures are cooler, such as early mornings or cloudy days. Allow plant tissues to dry after rain or irrigation before applying PSO, and avoid application if humidity is expected to remain over 90% for 36 hours or longer. Avoid applications during shoot elongation. Do not apply oils when temperatures are above 100º F or below 40º F.

Opportunities for Future use

Horticultural mineral oils present a reduced-risk approach to controlling pests in keeping with the movement toward more biologically-based systems. We know from currant usage that oils can act as direct controls for scale insects, mites, and aphids in some crops. Research is needed to improve efficacy and further reduce phytotoxicity. The present uses could be expanded to include other crops, more acreage, and other insects such as leafhoppers, mealybugs, and leafrollers. Used in combination with synthetic fungicides, PSOs may help reduce or prevent the buildup of fungi resistant to novel fungicides with specific modes of action.

Horticultural mineral oils have long been used as adjuvants with conventional pesticides to improve the level of efficacy of these products. Their use in combination with reduced-risk pesticide products for insect and disease control should be more widely tested to see if these materials can be used more effectively, or at lower rates and therefore more economically. PSOs are already applied to a wide variety of crops. Specific guidelines for their use against insects, mites, and diseases have already been established on many crops, attesting to their potential and acceptance. Horticultural mineral oils are relatively inexpensive and safe to use. These products could play an important role in the establishment of future IPM systems that rely less on conventional pesticides.