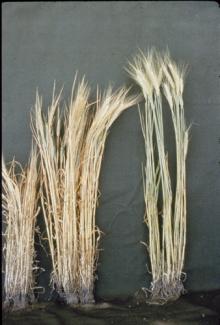 Healthy plants are on the right.
Photo by R. Smiley.

Note the discolored and rotted roots.
Photo by Paul A. Koepsell, 1984.

Cause A fungus, Gaeumannomyces graminis (syn. Gaeumannomyces graminis var. tritici), which lives in soil or diseased cereal and grass stubble and straw. Damage is severe in western Oregon and Washington and in irrigated areas of central and eastern Oregon. It also can be serious in extreme northern Idaho and throughout the irrigated Snake River Plains. The disease is mild in most non-irrigated fields in low rainfall areas but causes economic damage in annual cereal produc tion or in years of above-average rain on fields with high-residue tillage practices. Lack of rotation will increase pathogen populations; vegetables, corn, annual legumes, and oilseed crops are non-hosts while wheatgrass and quackgrass (Agropyron spp.), bromegrass (Bromus spp.), and bentgrass (Agrostis spp.) are hosts. Infections are favored by soil at 50°F to 68°F and moist conditions, which are common in the Willamette Valley. In western Oregon, the severity of infection by flowering (during late May), soil moisture levels after flowering (June, July), and fertility program all strongly influence yield losses. Liming of moderately acidic soils increases disease incidence.

Symptoms The stem's base is covered with a coal-black fungal growth under leaf sheaths. Individual roots turn coal black and are coal black on the interior when scraped. Plants are stunted, mature early, and have white, empty heads. Some tillers may fail to head.