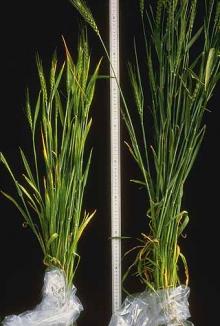 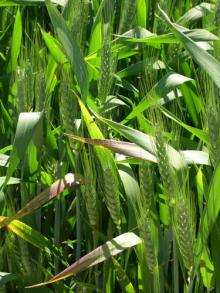 Leaf tips of affected wheat in May.
Photo by Cynthia M. Ocamb, 2009. 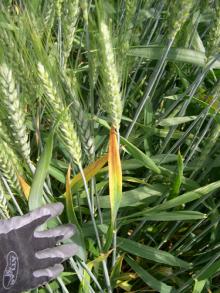 Cause Barley yellow dwarf virus (BYDV) is present in many cultivated and wild grasses. Many grassy species in non-managed grasslands present in the Pacific Northwest are susceptible to BYDV, including: Achnatherum lettermanii, A. occidentale, A. thurberianum, Alopecurus pratensis, Bromus inermis, Danthonia intermedia, Elymus elymoides, Poa bulbosa, P. fendleriana, P. secunda, Sporobolus airoides, and S. cryptandrus. A group of virus strains can incite yellow dwarf and cause worldwide disease problems on barley, oats, and wheat. Some hosts may not show visible symptoms of infection, as in common for corn in the Pacific Northwest. BYDV is transmitted by several species of aphid, including the bird cherry-oat aphid (Rhopalosiphum padi), rose-grass aphid (Metopolophium dirhodum), English grain aphid (Sitobion avenae), corn leaf aphid (Rhopalosiphum maidis), and green bug aphid (Schizaphis graminum). Virus strains transmitted primarily by Rhopalosiphum padi are now called Cereal yellow dwarf virus (CYDV)-RPV, while those transmitted by Sitobion avenae are called BYDV-MAV. Virus strains transmitted by both aphid species are called BYDV-PAV. Metopolophium dirhodum is reported to transmit BYDV-PAV strains and possibly CYDVRPV, while Rhopalosiphum maidis is reported to transmit BYDV-MAV and an additional strain, BYDV-RMV. Studies in cereals have shown that when BYDV-PAV and CYDV-RPV occur to together in a cereal plant, more severe symptoms develop than when plants are infected with either virus strain alone. Research in cereals has shown that plants infected with strains of yellow dwarf may be more susceptible to root diseases, including Take-all. Barley yellow dwarf is more severe under cool, moist conditions that promote the aphid population.

Symptoms Symptoms can be variable and may be confused with nutrient deficiencies or stress. Early symptoms of fall infection of wheat may first appear during spring as yellowish or reddish leaf tips. Affected leaves may have yellowish, uneven blotches on leaves, which can turn reddish or purplish. Tissues next to midribs retain their green color longer than the rest of the leaf. The youngest leaves may not have an unusual color. Affected leaves may have a premature die back in hot weather.

Damage may not be severe, depending on growth stage at infection, virulence of the viral strain, susceptibility of the variety, temperature, and light intensity. Severely affected plants may be stunted and may not head. Infected plants may ripen prematurely or be predisposed to fungal diseases, such as root rot.