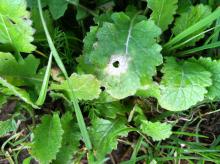 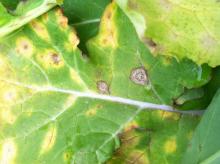 Turnip with black leg leaf spots (center) at a later stage; note the tiny black pycnidia that dot these mature leaf lesions.  Most of the leaf spots to the left side of the leaf are white leaf spot. 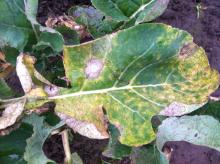 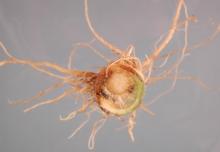 Cause Plenodomus lingam (syn. Leptosphaeria maculans, anamorph: Phoma lingam) and Plenodomus biglobosus (syn. Leptosphaeria biglobosa) are fungi that can infect a range of cruciferous crops. Host plants include Brassica crops (broccoli, Brussels sprouts, cabbage, collards, canola, kale, mizuna, mustard greens, etc.), Sinapis (white and yellow mustard), and Raphanus (daikon and radish). Cruciferous weeds common in the Pacific Northwest can be host to black leg, including: birdsrape mustard (Brassica rapa), black mustard (B. nigra), western yellow cress or curvepod yellowcress (Rorippa curvisiliqua), tansymustard (Descurainia pinnata), hedge mustard (Sisymbrium officinale), tumble mustard (S. altissimum), small tumbleweed mustard (S. loeselii), pennycress (Thlaspi arvense), mouseear cress (Arabidopsis thaliana), annual wallrocket (Diplotaxis muralis), perennial wallrocket (D. tenuifolia), and wild radish. The fungus survives on living plants as pycnidia, which produce water-splashed pycnidiospores, or survives with plant debris as pycnidia and/or pseudothecia. Pseudothecia, sexual reproductive structures, release ascospores that may be windborne long distances, at least several miles and perhaps further with storm fronts. The fungus survives in association with infected plant residues until the plant debris decomposes (1 to 5 years). In fall-sown crops or winter weeds, new pseudothecia can form on dead portions of infected plants prior to harvest or plant death, and pseudothecia can continue forming in the plant residues remaining on the soil surface after harvest. In spring-sown crops, pseudothecia do not form on dead parts of infected plants until after harvest. Timing of ascospore release is dependent on temperature and rainfall. When infected plant residues are on the soil surface, ascospores release from pseudothecia following wet or humid conditions and when mean temperatures are between 46°F and 59°F. It has been reported that ascospore release by P. lingam and P. biglobosus under controlled conditions occurs at temperatures between 41°F to 68°F. Ascospores germinate at temperatures between 41°F and 68°F, but ascospores of P. biglobosus may germinate more rapidly compared to P. lingam. Germination of ascospores by both of these fungal species occurs more quickly in the higher range of temperature compared to 41°F, with 59 to 68°F being the optimum but temperature, cultivar, and tissue type are all important factors modulating ascospore germination. Non-germinated ascospores can potentially survive days to months in the absence of a host, and ascospores of P. lingam exposed to dry air survived longer than those of P. biglobosus. Conditions conducive for ascospore production and release commonly occur during the fall, winter, and spring-times throughout portions of the Pacific Northwest. Trap plants deployed weekly by OSU at multiple sites around the Willamette Valley in western Oregon, beginning in October 2014 and 2015, showed that ascospore infections begin around mid-October. During 2015-2016, ascospore infections of trap plants occurred from mid-October all the way into May, with severe disease pressure during February and March. The periods of higher ascospore release and infections of plants will depend on the environmental conditions. Ascospores infect through natural openings in the plant surface or via wounds; wounding of plants by insects, herbicides, or other mechanical means can increase disease incidence and severity. After successful infection of a leaf, hyphae will grow between the mesophyll cells towards the petiole and then along the vascular tissues, in or alongside the xylem vessels. Plenodomus lingam growing from an initial leaf lesion can ultimately result in stem cankers subsequently developing as cortical tissues in the stem are colonized, and this fungus can eventually invade the tap root, causing rot of roots, especially of the tap root or storage roots.

Two types of pycnidia (which produce asexual spores known as pycnidiospores or conidia) can be found; one on infected, live plants (thinner-walled pycnidium with a neck) and the other on crop residues (thicker-walled pycnidium with a narrow ostiole). Conidia are dispersed by splashing rain or irrigation water, so conidial movement is limited to relatively short distances, but conidia can add to the overall incidence and severity of disease within a field. Workers or equipment moving through infected plantings during wet conditions when pycnidia are present can spread the black leg fungus. The process by which conidia of P. lingam and P. biglobosus infect plants is similar to that of the ascospores. The germination of conidia occurs at temperatures ranging between 41°F and 77°F. Examination of conidial inoculations using a set of P. lingam and P. biglobosus isolates on a set of differential cultivars of canola showed that a higher relative humidity level can increase the aggressiveness of P. lingam as well as the virulence of P. biglobosus.

The black leg fungus can also move with infected seed, Leptosphaeria can survive for years in association with seed. Leaf spots on cotyledons or first true leaves can be a result of infested seed, but regional epidemics are thought to arise from infected plant debris if seed lots used for planting are Leptosphaeria-free. The Oregon Department of Agriculture now requires that all crucifer seed, even half ounce or smaller packets, that is to be planted in Oregon must be accompanied by an official test showing that the untreated seed is free from black leg (Leptosphaeria species). Black leg can reduce vegetable and seed crop yields, and low levels of seed infection coupled with weather favorable for disease spread can lead to stand die-out in a field. After a disease outbreak in a larger geographic area, the threat to seed yield or storage root harvests in fall-sown crops is much greater due to the abundance of affected crop residues on the soil surface, especially if field-wide epidemics occurred in no-till production. Widespread leaf spot and subsequent black leg stem cankers can result from unprotected plants being exposed to ascospores released from infected crop residues. Replanting or allowing volunteers to grow in a field after a black leg outbreak can result in high numbers of infected seedlings by fall in western Oregon or Washington Brassica seed fields, perpetuating disease. Planting adjacent to a previously-infected field in Oregon can also result in a high disease incidence (40 to 60%) within a new planting by December, while planting within a few miles of an infected residue site can result in generalized infections across new fields (1 to 5%) by December. Researchers at OSU have observed in fall-planted seed fields in western Oregon that uncontrolled black leg infections can increase from 1 to 5% disease incidence up to 40 to 90% of the plants in a stand being infected within a 6-week period. Infections of fall-planted vegetable or seed fields can lead to stand losses through winter and into the spring. Secondary diseases are common on plants with black leg; Sclerotinia, Botrytis, and soft rot bacteria are especially common on Leptosphaeria-infected plants in western Oregon during rainy weather and may mask black leg infections by six weeks later.

Symptoms Damping-off typically occurs if infected seed is planted. In many crucifer types, a black streak inside the lower stem can be seen early when seed was infected and leads to decay of the lower stem. Sometimes small, brown flecks develop on cotyledons. Affected plants that survive infection at the seedling stage from seedborne inoculum will be stunted and often develop a rot of the stem at or just below the soil line which moves upwards, and causes plants to die. Generalized leaf spot have been observed across fall-planted seed fields in western Oregon after initial infections due to windblown spore (ascospore). Spots first appear as pale, irregular spots on cotyledons, leaves, stems, or petioles; leaf spots later become somewhat circular to oval in shape with ashy-gray colored centers containing scattered tiny, black pycnidia. Sometimes the center of leaf spots will fall out, especially after heavy rainfall, but a narrow, ashy-gray band usually remains where pycnidia can be seen. The fungus grows systemically down the plant from leaf spots, and later can erupt on the stem as a canker. Stem cankers are elongated, with purple-black borders, and may girdle the stem as well as decay pith tissues. Vascular tissues may turn black in color in infected areas of the plant. Stem cankers or stem lesions, can extend further down the plant, resulting in a grayish-black rot of storage roots. Infections may be apparent on the outer portion of storage roots, and usually include areas with an ashy-gray appearance where tiny, black pycnidia can be found.

Sampling The states of Oregon and Washington require that all crucifer seed planted in their respective states must be accompanied by an official test stating that the untreated seed is free from black leg (Leptosphaeria species). Plant clinics, including the OSU Plant Disease Clinic, can test seed lots suspected of having seedborne Leptosphaeria prior to stock seed samples being submitted for official tests. Seed stock can be assayed for the causal organism in official tests conducted by a number of labs. The following labs are certified to officially test seed lots that require Leptosphaeria testing before distribution in the state of Oregon:

Chemical control Seed treatment and a foliar fungicide program will be essential if growing over-wintering crops in any region where black leg epidemics have occurred across a larger geographic area. Infected seed can occur in seed lots, certified to be free of Leptosphaeria, at levels below the detection threshold by seed testing, and chemical or hot water seed treatments will aid in controlling disease introduction by infected seed.