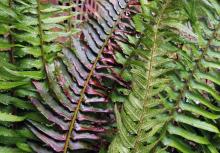 Normal sword fern leaves with declining last year's leaf on the right and sori (regular rows of bumps on the underside of the leaf) on the left.

Cause There are not a lot of problems on sword ferns but leaf spots and root rots are the most frequent. Several fungi have been reported from Oregon and Washington including Phomopsis, Phyllosticta, and Taphrina spp. It was suggested that in Oregon, Taphrina infects in the summer allowing the other fungi to opportunistically colonize the lesion later. A rust, Milesina vogesiaca and other species, has also been reported. This rust also occurs on wood ferns (Dryopteris spp.) and alternates on true firs (Abies spp.). The OSU Plant Clinic has also found Phoma, Botrytis, Cladosporium and Epicoccum from sword fern leaf spot samples.

A few root rots can also occur with Phytophthora or Pythium found by the OSU Plant Clinic. Both of these organisms are called water molds as they are favored by poorly draining, wet growing conditions.

Symptoms Leaf spots may be of a wide variety of sizes and shapes. Taphrina spots start out as small (5mm), round to oval, white to light green, slightly thickened spots. These leaf blisters appear around June and become brown with age. The leaflets (pinnae) become distorted and slightly curved. These areas decay later, become watery and/or may drop off the leaf.

Regular rows of spots on either side of the midrib on the underside of frons is likely the sori which is a normal reproductive structure of these ferns.

Phytophthora root rot includes wilting of one to several fronds at first but ultimately plants collapse and die. Roots become rotted and nonfunctional prior to symptom development in the field.

Chemical control Some products are labeled for nursery-produced "ferns" and can be used if not phytotoxic.