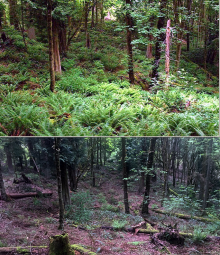 Upper image is from June 2011 while the lower image from the exact same location is from May 2017. Note lack of sword ferns.

Cause Unknown. Large areas of uniform patches of sword fern understory have been observed to die-off in the Puget Sound area of Washington including Seward Park in Seattle (in 2013), Kitsap Peninsula (in 2010), and Mercer Island. These circular areas (at least 400 sq ft) have very few surviving ferns and continue to enlarge each year. Few if any other understory plants occur in these areas, which are left bare with dead fern crowns. The problem is not due to mountain beaver grazing and has not been attributed to suspected soilborne fungi such as Phytophthora or Rhizoctonia.

Symptoms Fronds at first wilt, then fall over and die. No fiddle heads are produced in the spring. Entire crowns die including roots. Lesions or active rots are not observed on these tissues. First symptoms may be a decrease in the number of fronds per crown.

Cultural control None known or can be suggested until a cause is discovered.