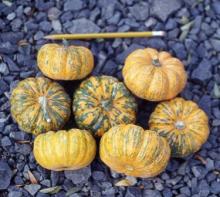 Cause The three most common virus diseases in Oregon are zucchini yellows caused by the Zucchini yellows mosaic virus (ZYMV), watermelon mosaic caused by Watermelon mosaic virus 2 (WMV2), and curly top caused by the Beet curly top virus (BCTV). The first two are potyviruses that are spread by aphids and by mechanical means such as equipment and pickers' hands and clothing. Aphids can move these viruses from weed hosts over relatively long distances. Curly top is restricted to production areas east of the Cascade Range. Cucumber mosaic virus (CMV) also can be a problem; it is spread by aphids and cucumber beetles. CMV overwinters in wild cucumber seed and in wild perennial milkweed, ground cherry, and matrimonial vine.

These viral diseases firzst become noticeable in mid to late July, often following cutting of grass seed and alfalfa fields, which may displace aphid populations from these fields. Fewer infections tend to occur during wet summers. Infections generally begin at the edges of fields and move inward.

Symptoms Generally, it is difficult to tell ZYMV and WMV2 apart based only on symptoms. Serological testing is the best way to distinguish between them. Curly top; however, is easy to differentiate from the two others.

ZYMV-a prominent yellow and green mosaic, necrosis, and a distortion called "shoestring" are on zucchini leaves. Early infection may result in no fruit set. Later fruit are severely distorted, small and green, and have yellow outgrowths.