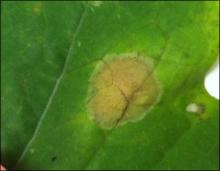 Cause The fungus, Cylindrosporium concentricum (sexual stage: Pyrenopeziza brassicae) was found in Oregon on canola, turnip, volunteer or wild radish, wild mustard, volunteer black mustard, and other cruciferous vegetable seed crops and cover crops in 2014. The disease was found during 2016 in the Skagit Valley of western Washington on mustard cover crops and wild mustard. All Brassica crops grown in the Pacific Northwest are probably susceptible but the specific host range within Brassicaceae is unknown at this time. Oilseed rape and cauliflower are reported to be more susceptible than Brussels sprouts or kale, but there is a range of susceptibility within each crop species. The pathogen has been a problem on oilseed rape in various parts of the world with seed losses estimated at 22% when outbreaks have occurred in the United Kingdom. This disease hasn't been previously reported in North America though an infected mustard field was found in western Oregon during 1998. Oilseed rape is very susceptible and losses results from stand die-out, reduced pod numbers, premature pod ripening, or an overall growth reduction with less severe infections. Brassicas grown as vegetables in other areas of the globe, where this disease has been reported, suffer blemish defects by relatively mild infections, causing a decrease in quality but not of yield quantity. Trichloroacetic acid-based herbicides may increase plant susceptibility by affecting the waxy layer of leaves.

Disease can occur in the western U.S. on both spring- and fall-planted Brassica and radish crops. Wet conditions and cool temperatures (41ºF to 68ºF with 59ºF being optimum) promote infection and symptom development in crucifer crops. Since seed can be infected or casually infested with the asexual stage, epidemics can be initiated by seedborne inoculum or from neighboring fields containing infected plants or plant residues, or from infected weeds. Ascospores of P. brassicae have not been observed in the U.S., but are reported in other nations; ascospores develop from apothecia produced on infected plant residues, typically in late summer and autumn, and can be wind-dispersed relatively long distances after a wetting period. Outside of the U.S., disease outbreaks are initiated by the ascospores, including in vegetable crops. Apothecia developed on infected plant debris at temperatures between 41ºF and 64ºF in published studies but developed more slowly under cooler temperatures (15 days at 43ºF vs. 5 days at 64ºF). Ascospores directly infect plants and once a plant is infected by either ascospores or conidia, the fungus systemically colonizes the plant aboveground and interferes with plant hormone production. Infected plants may remain asymptomatic for a period of time, days to weeks or longer. After lesions develop on leaves or stem surfaces, conidia can be produced. Generally, conidia developed at temperatures between 46ºF and 68ºF with free moisture being present for 6 to 72 hours. Studies have shown that greater numbers of conidia are produced at temperatures between 54ºF to 61ºF. The period between infection and sporulation in controlled studies was shortest at 61ºF (approximately 10 days). Conidia are dispersed relatively short distances by rain or splashing, blowing water droplets, resulting in disease spread across a field and potentially inciting pod infections in seed crops. Conidia can infect plants at temperatures between 39ºF and 68ºF, if free moisture is present for periods longer than six hours.

Symptoms This fungus can attack leaves, stems and pods. Flecking may be observed on cotyledons while leaf infections start as discolored patches that develop into irregular brown lesions with cracked centers, sometimes turning black. Leaf lesions can coalesce, causing death of leaves. When leaves are infected young, distortion can develop. Stem lesions are elongated brownish streaks with grayish-black margins and can be mistaken for black leg, except lesions are usually superficial. Flower infections may cause abortion. Pods infected early appear distorted while pods infected later result in relatively healthy-looking pods but will have white spore masses. Seedlings can be killed, or plants may be stunted.

Foliar applications during the fall, winter, and spring will help to protect seed fields: