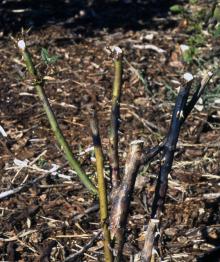 Winter injury of rose. Note the black and yellowed canes.

Cause Cold and dry wind can kill the scion of a dormant rose. Plants fertilized late in the year may continue lush growth into fall and early winter and are more susceptible to winter injury. Some cultivars are not adapted to colder regions or higher elevations. Good cold hardiness was introduced in rose breeding programs through hybridization with wild species such as R. rugosa, R. arkansana and R. wichurana.

Symptoms Buds may fail to break open in spring or may wilt and collapse shortly after emerging. In severe cases, canes turn black or deep purple. Rootstocks may survive and emerge at or below the ground level later than other roses. The rootstock will tend to have leggy growth, thin canes, and small, numerous flowers.