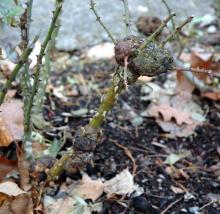 Galls occur near soil line as well as near pruning cuts as in this image.

Note that the galls have started at pruning wounds. Also, the cross-section of the gall on the right shows disorganized but solid tissue.

Galls may be numerous on canes or branches.

Galls can be seen above or below ground. 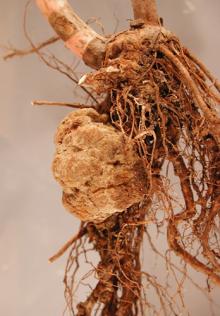 Most of the time galls appear below ground and may be overlooked as a cause for poor growth.
Melodie Putnam, 2008.

Cause The bacterium Rhizobium radiobacter (formerly Agrobacterium tumefaciens) enters plants through wounds, either natural or caused by pruning, grafting, mechanical injury from cultivation, heaving of frozen soils, chewing insects, or the emergence of lateral roots. Systemic populations that initiate disease are as important in rose as they are in grape and walnut. After the bacterium enters a wound, a small piece of its DNA is transferred into the plant's DNA. The foreign DNA transforms normal plant cells in the wounded area into tumor cells. Once transformed, tumor cells proliferate automatically. The result is a gall: a disorganized mass of hyperplastic and hypertrophic tissue.

Pruning tools that cut through galls can become contaminated with the bacteria and spread them to cut surfaces of subsequently pruned plants. Galls breaking down in soil release bacteria, which can be transported by moving soil or water. In the absence of plant roots, bacterial populations gradually decrease; however, the pathogen may survive in soil for as long as 3 years. Many plants in 90 families are susceptible but woody perennials such as stone and pome fruit, caneberries (such as blackberry and raspberry), euonymus, Photinia, poplar, rose, walnut, and willow are typically infected.

Symptoms Galls are often at or just below the soil surface in the basal or root crown region. They may frequently be on roots, less frequently on aerial plant parts. Galls are usually rounded with a rough, irregular surface. They first appear as small protuberances on the plant surface. Young, actively developing galls are light green or nearly white, and the tissue is soft. As they age, galls become dark and woody. Outer portions can slough off with age. Sometimes galls have a rather smooth surface, which makes it difficult to distinguish between gall and callus growth, especially if the gall is at the plant base or at the graft or bud union. Plants can be stunted and have reduced vigor, poor foliage, and fewer blossoms. A single gall at the plant's base may be more detrimental than several galls on canes and roots. Symptoms may not develop for over a year if infection occurs when temperatures are below 59°F.

Products available for commercial use:

Biological control Agrobacterium radiobacter strain 84 has been used successfully with roses in Australia, New Zealand, and Spain but has not been effective in limited trials in the United States. Strain K 84 is preventive only. Latent infections (symptomless) and existing galls are not controlled. A suspension of strain 84 may be used as a soak or spray. Thoroughly cover grafting wood, roots, and crown. Spray to runoff. To be effective, it must be applied a few hours after wounding.