The gray lesion with a dark border restricts water and nutrient movement in the cane. 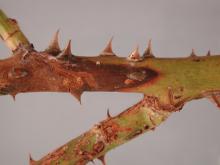 Coniothyrium was isolated from this canker.
Melodie Putnam, 2007.

Symptoms The diseases are easily confused. Both start out as discolored (yellow to red) spots that gradually enlarge with the center turning light brown. In cut-flower production, the cut stem turns yellow-to-black as the pathogen advances into the tissue. Brand canker develops a reddish-brown or purple margin that contrasts sharply with the normal green rose cane. Common canker has a darker brown margin and generally develops at the cane's cut end. Both cankers develop small black fruiting bodies (pycnidia) toward the center of damaged tissue. Brand canker that develops under the snow line will at first in spring be black, but then it develops as described above after being uncovered several weeks. Cankers may girdle stems, causing stems and shoots above that point to wilt and die. The disease is easily confused with Brown Canker.