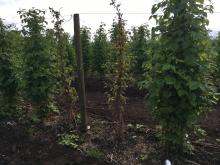 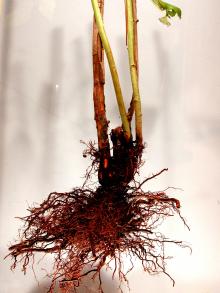 Dieback and crown rot due to Phytophthora sp. 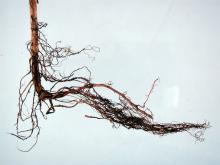 Root systems are very reduced once Phytophthora gets established. 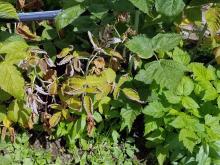 Cause Phytophthora rubi, a fungal-like organism, causes a destructive root rot on red raspberry cultivars throughout the region. Damage is most severe in fields with poor drainage that may be the result of heavy soils with greater clay content, hardpans, excessive irrigation, or low-lying areas where water collects. This fungal-like microorganism survives as mycelia and as thick-walled oospores that are produced in dying and dead raspberry plant tissues. As the dead plant tissues decompose, oospores are released into soil. Under saturated conditions in spring or summer, swimming zoospores are produced that swim to nearby roots and initiate infection. Small roots rot quickly, and infection moves up into larger structural roots and then into the lower canes. This organism infects roots in the spring and summer months (from May through September), when soil temperatures are consistently in the range of 15 to 20°C.

Symptoms The most noticeable symptom is wilting and death of canes from early spring to late summer. Wilting often coincides with the onset of warmer, drier conditions. Leaves on infected canes may turn yellow or bronze, wilt, and develop scorch symptoms before dying. Dead leaves usually remain on the stem. Floricanes often start to die just as the fruit begins to ripen in June, causing the fruit to be undersized or to wither before ripening. Primocanes usually begin to wilt from the tip down. Primocane tips bend over, exposing the silvery undersurfaces of the leaves forming a shepherd's crook. New primocanes may also be killed before they break the soil surface. In many cases, one or a few canes of a plant may die while the rest remain healthy. Often, multiple plants in low lying areas of the field die, leaving large open patches known as disease pockets.

Lesions are formed on the roots and may extend up into the canes. If the epidermis of the infected area is scraped off, a sharp transition zone is visible between the healthy root and stem tissues (white or bright-green) and the diseased, rotted tissues (reddish-brown). Excavation of compromised root systems reveal that most larger-diameter roots are dead and that there are few, if any, smaller-diameter feeder roots. New roots may form above the decayed root system during the summer and the plants may appear to recover, but infection resumes during the cold and wet weather of fall and winter.

Chemical control Results are best when several cultural and chemical practices are integrated. Limit the use of any one group during crop production.