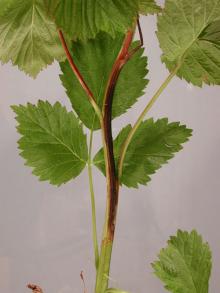 The canker on this primocane is due to Pseudomonas.
Melodie Putnam, 2007. 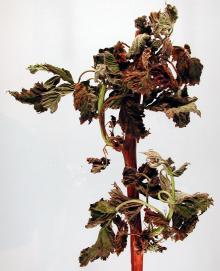 Cause A bacterium, Pseudomonas syringae pv. syringae. Strains are found on many plants, including blueberry, cherry, apple, and pear. Outbreaks usually are associated with cold (31°F to 33°F), moist weather. Succulent growth from high nitrogen is more susceptible when conditions favor infection. The disease on raspberry occurs occasionally in the Pacific Northwest.

Symptoms Brown water-soaked spots on leaves and petioles of developing laterals or young primocane shoots in the spring. In wet weather, spots enlarge rapidly, killing leaves and shoots. Brown streaks extend from these dead tissues down under the bark. If the infection does not fully girdle the stem, affected laterals show a characteristic downward bend. If infected laterals are not killed they are often stunted. Rare glistening stands of ooze may occasionally be seen on the surface of infected tissues. Other diseases and problems on raspberry can have similar symptoms, which makes positive identification difficult.

Chemical control Before fall rains and as a delayed dormant application.