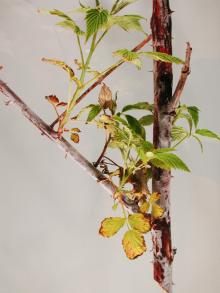 Cause Seimatosporium lichenicola (formerly Sporocadus lichenicola), a fungus that can infect red and black raspberry, 'Loganberry', and Himalaya and evergreen blackberry. Blueberry can also be a host. Infection may require a previous low temperature injury of the plant but the life cycle of this fungus/disease has not been studied in detail.

Symptoms Lesions at nodes in late summer or fall on raspberry primocanes. Lesions are superficial, do not reach the cambium and generally do not girdle the stem. They are gray-white with reddish margins and reddish-brown fruiting structures (acervuli) develop in spring. Patches may turn brown or black, and the cane may crack at the site. Symptoms often are in blackberry fruiting canes after a year of winter injury.