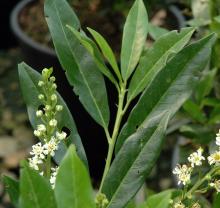 Note the holes in the leaves both along the margins as well as in the leaf blade. 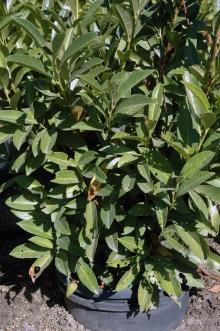 Shothole symptoms are more obvious near the base of this plant. 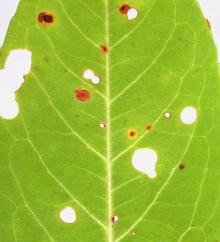 Leaf spots and shothole on English Laurel due to Pseudomonas.
Melodie Putnam, 2009.

Leaf spots and shothole due to the fungus Wilsonomyces carpophilus.

Cause Shothole symptoms are commonly observed on Prunus spp. and can be caused by a variety of factors. Development of the shothole symptom is in response to mechanical, chemical, or pathogen injury. There is the formation of meristematic tissue around the injury that becomes lignified or suberized to form a physical and biochemical barrier that, in the case of pathogens, limits the colonization of healthy tissue. The formation of an abscission layer may be dependent on temperature. In almond leaves, an abscission layer formed at 72°F but not at 59°F.

The bacteria Pseudomonas syringae pv. syringae and Xanthomonas arbicola pv. pruni as well as several fungi including Cercospora sp., Blumeriella sp., and Wilsonomyces carpophilus (Coryneum blight) can cause leaf spots and shothole on cherry laurel (English laurel, Otto Luyken, or 'Zabeliana'). Several other fungi and bacteria have been found to cause shothole symptoms. Of particular concern is the oomycete Phytophthora ramorum, which is a regulated organism.

Copper spray injury and boron toxicity can also cause leaf spotting and shothole. When symptoms are advanced, it is not possible to identify the cause specifically. Some virus infections (such as Prunus necrotic ringspot virus) can cause a shothole symptom in fruiting cherries but this has not been reported for cherry laurels.

Cherry laurels (English laurel, Otto Luyken, or 'Zabeliana'), P. laurocerasus and sometimes other Prunus spp. including cherry and plum, commonly show shothole symptoms resulting from only cultural or environmental stress. Both container- and field-grown laurel can develop symptoms. Some growers have observed that plants are more susceptible to symptom development when grown in containers. Portuguese cherry laurel (Prunus lusitanica) is nearly resistant.

Symptoms Necrotic leaf spots with circular to irregular margins. Bacterial spots are brown surrounded by a reddish border with a yellow halo. Abscission layers develop around necrotic leaf spots causing the injured tissue to drop away, leaving holes and tattered areas in the leaf (as if someone fired a shotgun at the leaf-thus the name shothole). After tissues drop, most often it is difficult to determine specifically what caused the initial injury. Observations of early symptom development, signs, and symptoms on other areas of the plant may help make an accurate diagnosis.

Cultural control No management practices have been shown to help reduce physiological shothole. For disease-induced shothole, try the following.

Chemical control Use only if a bacterial or fungal cause has been identified.