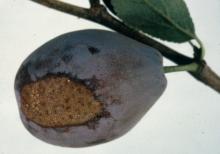 Note the scabby area on the side of the fruit.

Russeted areas have a thin cuticle, lack epicuticular wax, and have abnormal stomata. Wind scab can occur when immature fruits rub against other fruit, leaves, or stems during strong winds. Fungal rots, such as Diaporthe cinerascens (formerly Phomopsis cinerascens), also may be more a problem at the margin of scabby areas Thrips damage also can result in similar russeting of all stone fruits.

Symptoms Russet scab starts on immature fruit as shiny areas 3 to 4 weeks after full bloom. Four weeks later, these areas become distinct and form an irregular, lacy band generally on the lower half of the fruit. This area becomes brown and rough just before harvest. Scabby areas can remain even after fruit are dried.

Wind scab is similar but generally runs along the axis of the fruit and occurs in the middle of the fruit. It also is a problem after fruit are dried. Similar russeting has been reported on Italian prunes in Oregon, and those affected fruit also are misshapen.

Chemical control Apply at full bloom for russet scab when wet weather is forecasted (fungicides would not be helpful for wind or thrips caused russeting).