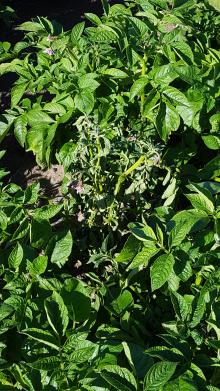 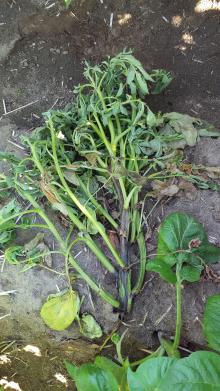 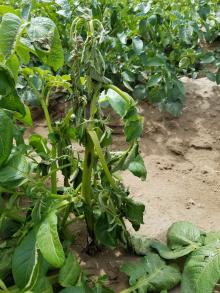 Note the black lesion at the stem base and aerial tubers on stems.
Photo by Phil Hamm. 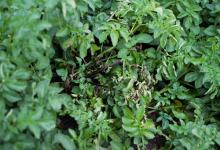 Cause The bacterium, Pectobacterium atrosepticum (syn. Erwinia carotovora subsp. atroseptica), is usually associated with blackleg and soft rot in storage while P. carotovorum subsp. carotovorum (syn. E. c. subsp. carotovora) is associated with aerial stem rot, lenticel rot, and soft rot. Moist, cool (below 70°F) conditions enhance blackleg while warmer conditions (70°F to 80°F) are optimal for soft rot. P. parmentieri and P. carotovorum subsp. brasiliense are also known to cause soft rot disease in the PNW but their abundance and economic importance is not currently known. Another bacterium, Dickeya dianthicola, is associated with blackleg on the east coast, resulting in poor emergence under warmer temperatures and decayed daughter tubers in affected fields. A Dickeya species, likely D. dianthicola, has been infrequently detected in diseased potatoes in the PNW.

Soft rot bacteria can be splashed onto plants by rain or irrigation causing aerial stem rot, and if present in surface irrigation water, can cause infections of leaf petioles and plant stems. These bacteria can survive on many weedy plants (nightshades, lambsquarters, pigweeds, purslane, etc.). They also reside in tuber lenticels without causing symptoms but can cause disease if tubers with lenticel populations are used for seed. The principal source of inoculum for blackleg is contaminated seed tubers. The bacteria can be spread among seed pieces by machinery and handling, moving from diseased to healthy seed pieces during seed cutting.

Symptoms Blackleg-leaves curl up; foliage gradually yellows and a wilt, due to root and stem rotting, generally happens prior to or at row closure. Often at the soil line or above, mushy light brown-to-blue to inky-black lesions develop. Belowground stems are the same color. Aerial tubers also may form on stems. Tuber rot usually begins at the stem end and results in a black, slimy rot. Lenticel rot occurs after washing prior to packing in fresh-market potatoes. These bacteria are present in soil and water. The problem is most often seen when packing potatoes directly from the field when pulp temperatures are warm.

Aerial stem rot-symptoms occur in the upper canopy and do not involve the stems below ground. Lesions range from light brown to colorless. Stems still get very mushy and hollow and may be filled with mucilaginous slime. Aerial stem rot can be exacerbated by inclement weather that damages plant stems (e.g., hail, high winds, etc.). This disease can be a secondary infection associated with stem infections by late blight.

Soft rot of tubers-on tubers, soft rot bacteria can cause disease in an area as small as a single eye or involve the entire tuber. Tuber tissues becomes soft, wet, rotted and are cream to tan in color. Upon exposure to air, tissues may turn brown to black in color around the infected areas, creating a delineation between infected and healthy tissues. Although rot of the soft-rot bacterium is relatively odor free, secondary organisms usually cause a foul smell.

Lenticel rot-the area around affected lenticels on tubers is usually swollen and appears wet but will dry to create small, sunken areas around each colonized lenticel.