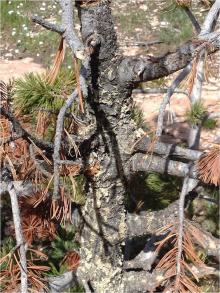 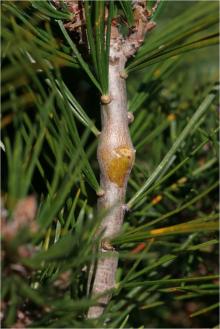 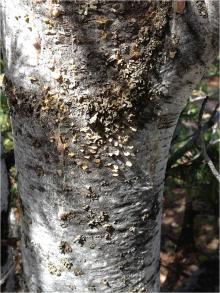 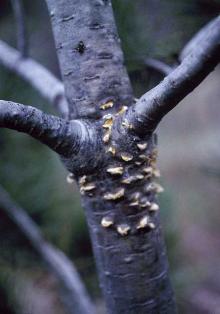 This shows the active aecia of this rust fungus.
Photo by Everett Hansen, 1981.

The fungus overwinters in tree cankers. In spring, spores form in orange pustules (aecia) on cankers. Wind distributes aeciospores to currants and gooseberries, the principal alternate hosts. Uredinia form on the underside of these Ribes hosts and produce urediniospores. The urediniospores can only reinfect more Ribes hosts and continue to do so during the rest of the growing season. Telia form in late summer where the uredinia are located. The teliospores are not dispersed but germinate to form another spore type called a basidiospore. These spores are blown to white pine, causing new infections by penetrating through stomata of needles (unless stomata are occluded by epicuticular wax). Pycnia appear on the bark the following spring. Aecia erupt from the same area where the pycnia formed the previous year. Aeciospores are produced perennially until the branch dies.

The disease is favored by cool, moist habitats rather than warm, dry areas. Open stands with a thick shrub layer encourages a moist air flow and thus distribution of spores. As one moves east away from the Cascade Crest, there is less rust along the east slope of the Cascades and into central and south-central OR. For example, there are low levels of rust on Walker Ridge on the Crescent District of the Deschutes National Forest (where sugar pine, western white pine, and some whitebark pine are present) and on the Fremont-Winema, low rust levels east of Klamath Falls. West of the Upper Klamath Lake closer to the crest there is moderate-to-high rust levels.

Symptoms The first symptom is a yellow or red spot on infected needles in the spring. By fall, orange hyphae may be seen in the bark at the base of these needles. Dark lesions develop in this area and continue to develop into the characteristic diamond-shape cankers. Old cankers are rough and elongate structures that develop on trunks and branches, causing dieback or "flagging." Orange spore masses burst through the margins of the cankered bark (aecia). An abundant pitch flow usually accompanies canker formation. A branch or branch stub may be near the canker's center. Generally observed in the lower portion of trees.

Chemical control Protect needles in the fall when telia are produced on the alternate host.