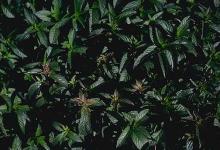 Plants near the center have smaller, bunched and/or bronzed terminal leaves.
Photo by Paul Koepsell, 1978. 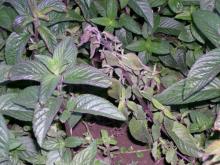 This section of field shows plant die-out due to Verticillium wilt.
Photo by Cynthia M. Ocamb, 2003

Cause A fungus, Verticillium dahliae, which lives in soil and in diseased plants. It is soilborne and once established in soil is almost impossible to eradicate due to microsclerotia, which germinate and infect roots. The fungus grows throughout the vascular system and up into mint stems. After diseased plant parts die, microsclerotia form and remain several years in soil. The pathogen is spread with infected rhizomes used for planting and in contaminated surface irrigation water. Co-infection of V. dahliae and the root lesion nematode, Pratylenchus penetrans, increase disease incidence and severity.

Native spearmint is relatively resistant, but Scotch spearmint and Black Mitcham peppermint are susceptible. Redefined Murray Mitcham is moderately resistant, but this variety is not as vigorous as Black Mitcham in the Columbia Basin. Grasses including corn and related crops do not sustain the population, but fallow or grass rotations alone may take many years to effectively reduce soil populations below economic levels.

Symptoms First, upper leaves twist and curl. Leaves are bunched at the top of the plant. Infected plants are stunted and foliage is yellowish to red or bronze. Lower leaves die first, then the aboveground part of the plant. With flowering or other stresses, stems or plants may die too rapidly for these symptoms to be observed.

Sampling Soil sampling is not recommended. Laboratories can determine the number of Verticillium propagules per unit of soil. However, there are no clear guidelines on what constitutes an economic threshold nor do we know whether laboratories' estimates are comparable. Also, soils may contain strains of the fungus that are not pathogenic to mint, which soil-only assays are not able to determine.

Reference Johnson, D.A., and Santo, G.S. 2001. Development of wilt in mint in response to infection by two pathotypes of Verticillium dahliae and co-infection by Pratylenchus penetrans. Plant Disease 85:1189-1192.