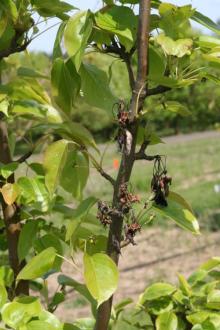 Cause The bacterium Pseudomonas syringae pv. syringae is much more severe on Asian pear cultivars (Pyrus pyrifolia and P. ussuriensis) than on European pears (P. communis) in western Oregon. This is due in part to the earlier bloom season for Asian pears. Early blooming trees are also more likely to be damaged by spring frosts, which provide an infection route for the bacteria. The cold, wet weather during spring is ideal for spread of the bacteria. Young, vigorously growing trees are more susceptible than older trees. Also, trees with a heavy bloom appear to be more prone to blossom blast than trees with fewer blossoms. Dormant pruning during cold, wet weather may allow the bacteria to enter wounded stems, resulting in stem dieback. Although the bacteria survive on the outside of the plant they must get inside and multiply in the space between plant cells (apoplast) to cause disease. These pathogenic bacteria inject several proteins and small-molecule toxins to get past host immune mechanisms. Once inside, the bacteria induce a watery, nutrient rich environment between the plant cells where they can multiply and continue colonization of the plant tissues. Bacteria also produce a protein that acts as an ice nucleus, increasing frost wounds that bacteria easily colonize and expand.

Symptoms While Pseudomonas typically causes only a blossom blast in European pears and rarely spreads into the wood, blossom blast in Asian pears often runs down the stem, killing entire branches. Shoots become water soaked and then turn black as the bacteria move down the stem. Young trees may be killed to the ground.

Chemical control Resistance to the active ingredients in these products has been detected in the Pacific Northwest. Limit the use of any one group during crop production.