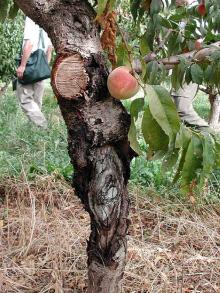 Note the cankered area on the lower portion of this trunk.
Photo by Melodie Putnam, 2001.

This infected peach twig has numerous dark pycnidia of the fungus.
Photo by Melodie Putnam, 2001. 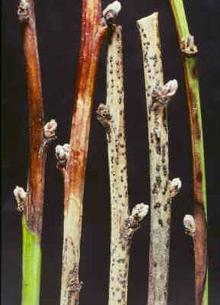 Cause Cytospora cincta (sexual: Leucostoma cinctum), fungus, and the closely related C. leucostoma (sexual: Leucostoma persoonii). These are vigorous wound invaders (including wounds from sunscald and winter injury) that ramify throughout the bark and cambium and to a lesser extent the tree's structural wood. The firm, red peach cultivars such as Zee Lady and Sierra Rich are particularly susceptible.

Overwintering is in infected stems and stem debris on the ground. These fungi have a wide host range and can infect virtually all stone fruit and pome fruit trees. They can be devastating in cherry, peach, and apricot orchards. Conidia are produced in cherry and peach orchards in eastern Washington throughout the year and the inoculum concentration is highest during the spring and summer. Over-the-canopy and under-tree sprinkler irrigation can promote sporulation and disperse conidia. Cankers have been reported on apple in all Pacific Northwest regions, especially after severe winters. Various ornamental shrubs and trees are susceptible as well. All these hosts can provide overwintering sites. Cytospora fungi do not destroy the tree's structural strength, but other fungi (principally the genera Stereum and Polyporus) commonly invade the Cytospora infection sites and cause rapid wood rotting, which adds to the severity of the disease's effects.

Symptoms To the casual observer, the first evidence of infection usually is dead twigs. Leaves above stem infections droop and discolor through shades of green to various shades of brown; they remain attached, sometimes through the winter. These "flags" are caused by stem invasions that have raised cankers that girdle or nearly girdle the stem immediately below the flag. Canker surfaces develop raised pinhead-size pimples (pycnidia) in the bark of most smooth-bark cultivars, but these may not be readily visible in cankers on peach and cherry stems. Amber to orange, hair-like spore tendrils extrude from the pycnidia in humid weather. These break off easily and can be blown about, tracked around by insects, and splashed by rain. In very wet weather, an amber spore droplet instead of the spore hair may form on the pycnidia.

Cankers are small at first but slowly enlarge elliptically; sometimes they streak rapidly up and down the stem without immediate girdling. In late season, a callus forms at canker margins, and fungal activity resumes in spring. If branches and trees do not die outright, they look very ragged; this stage is often known as perennial canker. All cultivars are susceptible, but reaction to invasion varies widely. Weakened trees are always easy victims. In Idaho, this disease is the limiting factor in 'President' plum production.

Chemical control The use of latex paint, Captan and/or Topsin was shown to be effective wound protectants prior to infection in Colorado. Latex paint, however, did not result in long term effective control. Lime sulfur gave variable results. Use of these materials after pruning or winter injury may be helpful. Use of copper-based fungicides was not only ineffective but resulted in some cases to be phytotoxic.

References Grove, G.G., and Biggs, A.R. 2006. Production and dispersal of conidia of Leucostroma cinctum in peach and cherry orchards under irrigation in Eastern Washington. Plant Disease 90:587-591.