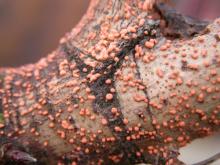 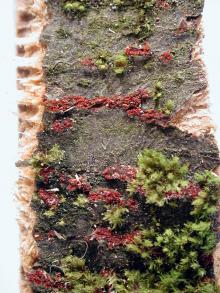 Small fruiting bodies of Nectria sp. on this Japanese maple. 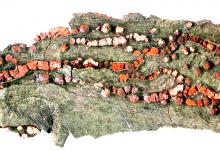 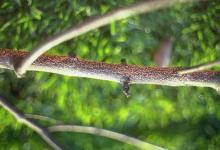 Note the numerous, small, pinkish fruiting bodies of the fungus along this branch.
Photo by Iain MacSwann, 1989.

N. galligena-Symptoms are similar to those for N. cinnabarina. However, if the tree or branch is not girdled, an elongate or elliptical canker forms year after year. Branches can become quite swollen and weakened and may break at this point in wind or ice storms.

Chemical control Apply fungicide after pruning but before a rain or irrigation to protect wounds against infection. No specific registrations are for this purpose. Many fungicides recommended for anthracnose control also help protect trees from nectria canker.