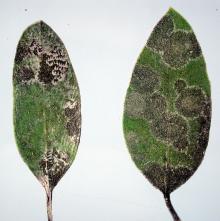 Leaf spots on these leaves yielded the fungi Cladosporium and Phomopsis.

Leaf spots may be numerous on the older lower leaves especially in the spring before new growth. New growth often looks fine as in this image.

Cause The OSU Plant Clinic has identified 8 different fungi from past samples of Manzanita including Cladosporium sp., Coniothyrium sp., Epicoccum sp., Exobasidium sp. (leaf gall), Monochaetia sp., Pestalotia sp., Phomopsis sp., and Pucciniastrum sparsum (rust). There could be as many as 15 different fungi, which have been reported from the PNW. For all these foliage diseases; however, airborne or water-splashed spores infect young leaves during wet weather, often in spring. The rust alternates between spruce and various species of bearberry including manzanita.

Symptoms Brown, dead, or dying spots on leaves. Many of these leaf spots will look similar and can be difficult to identify from casual observations. A few might have more distinctive symptoms such as leaf rusts or leaf galls.