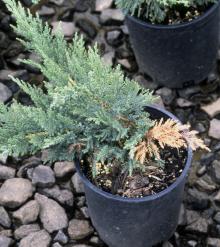 Note the dead branch due to Phomopsis. 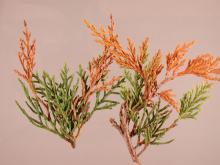 Phomopsis causes dieback of the current year's growth only. Older tissue will not be affected.
Melodie Putnam, 2008. 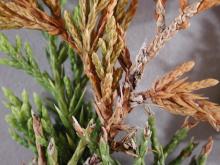 Black fruiting bodies of the Phomopsis fungus may sometimes be found on the affected foliage. Microscopic examination of the fruiting bodies is necessary to distinguish them from those produced by non-pathogenic fungi which may be colonizing dead tissues.
Melodie Putnam, 2008. 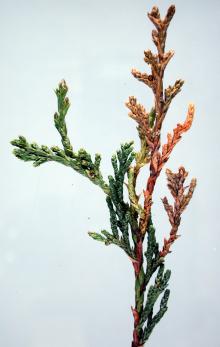 Twig blight due to Kabatina.

Cause The fungus Diaporthe juniperivora (formerly Phomopsis juniperovora) is found most often in western Oregon. Kabatina juniperi also causes a tip blight but is rare in western Oregon. Kabatina tip blight is more common in eastern Washington and throughout nursery markets east of the Rocky Mountains. Cultivars differ in susceptibility to both fungi. J. chinensis 'Pfitzeriana Aurea' is considered resistant to both. Mostly a nursery problem and not present in the landscape as much.

Time and location of infection also differ. Diaporthe infection occurs whenever foliage is young and moisture and humidity are high-generally, spring. Older, mature foliage is resistant to infection. Excessive pruning or shearing in summer will stimulate new, succulent growth that is highly susceptible. Kabatina infection is thought to occur in fall and often is associated with wounds, insect feeding, or mechanical damage.

Symptoms Both fungi cause a foliar blight and tip dieback, which are difficult to separate. Diaporthe-affected foliage first turns dull red or brown and finally ash-gray. Small gray lesions often girdle branch tips and kill the foliage beyond the diseased tissue. Small, black, fruiting bodies (pycnidia) develop in lesions. Most blighting is on the terminal 4 to 6 inches of branches. Repeated blighting in early summer can result in abnormal bunching of shoots, which may resemble a witches' broom. Young trees or shrubs may be stunted with discolored foliage and may eventually die.

Symptoms of Kabatina infection generally are before those of Diaporthe. The ends of branches turn dull green then red or yellow. Small ash-gray to silver lesions dotted with small, black, fruiting bodies (acervuli) are visible at the base of the discolored tissue. Generally, this fungus does not result in extensive branch dieback or tree death, which could indicate a root problem.