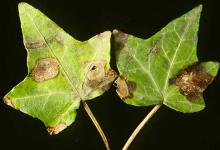 Cause Two fungi have been reported on English ivy in Oregon and Washington: Colletotrichum trichellum, also known as anthracnose; and Phyllosticta concentrica. Rainy or wet conditions favor both fungi. Wounded leaves develop large spots when inoculated with anthracnose.

Symptoms Anthracnose is characterized as a necrotic leaf and stem spot. Generally, spots are less angular than those caused by bacterial leaf spot. Sometimes the stem becomes girdled, which results in the collapse and death of that portion of the vine.