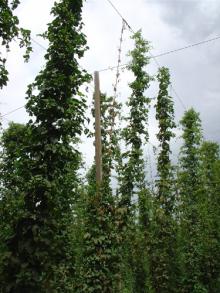 Plants of the hop cultivar Glacier in the center of the photo showing reductions in vigor due to infection by Hop Stunt viroid, compared to the vigorous plant on the left.
Photo by Ken Eastwell, 2006. 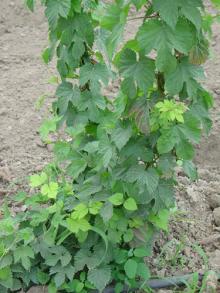 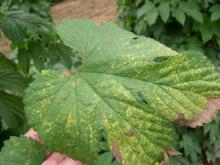 Generalized speckling on 'Sterling' leaf due to HpSVd.
Photo by C. M. Ocamb, 2007 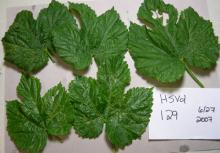 Symptoms HpLVd-infected plants have no known symptoms on varieties grown in the Pacific Northwest. Symptoms of HpLVd on variety 'Omega' appear as a yellowing and curling of leaves. Necrosis of leaves and leaf margins is common. Infected plants are stunted, have shortened internodes, and in general have an unthrifty appearance. Yield losses can be significant.

The symptomology of HpSVd is not well known for most hop varieties grown in the Pacific Northwest. In some varieties such as 'Glacier', HSVd causes a stunting of plants, yellowing, and curling of the upper leaves. On other varieties there may be a yellow speckling of leaves, and sidearm stunting or dieback. Plant height may be reduced by 40% as compared to noninfected plants. The severity of symptoms may become progressively greater with time. On susceptible varieties, the number of cones produced and cone size are reduced by as much as 50% to 75%. The alpha-acid content of cones that are produced is one-half to one-third of that in cones from healthy plants.

Plantings with high levels of Hop stunt also have been observed to have very high incidences of Fusarium canker and the presence of canker may lead to the discovery of the viroid disease in hop varieties more tolerant of Hop stunt viroid infection.

Cultural control Exclusion is an important means of viroid control.