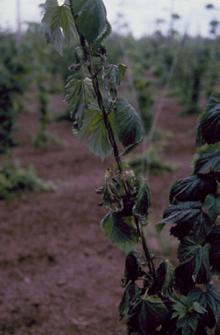 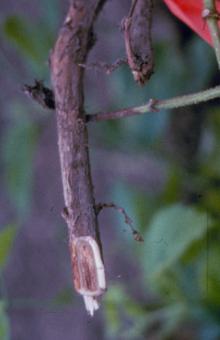 Note the brown discoloration of the woody tissue under the bark.
Photo by Darrell Smith.

Cause Two fungi, Verticillium albo-atrum and V. dahliae, have been detected in hop plants. The virulent form of wilt incited by V. albo-atrum occurs on hop in Europe but less lethal strains of this species been found on hop in Oregon. Hop plants in the PNW are typically infected with the less aggressive species, V. dahliae. A third species, V. nonalfalfae, has detected on hop in Belgium, Slovenia and UK. These fungi survive in soil and diseased plants and infect through plant rootlets. 'Fuggle', 'Cascade', 'Willamette', and 'Columbia' sometimes get the milder form of the disease, caused by V. dahliae, in the PNW. 'Bullion' and 'Brewers Gold' are resistant to the mild form. The mild form infects many common weeds, so weed control is important. Some hop plantings have "wilt spots." Do not put bines and harvest debris from these spots back on agricultural land as Verticillium can persist in hop residue.

Symptoms Leaves yellow and die from the base up. Dying leaves usually show a tiger-stripe effect because bands of dark necrotic tissue alternate with yellow. Bines cut near the base of the hill usually show a light brown discoloration of woody tissue under the bark. Heavily infected plants die on the string, usually just before or at harvest. Fields infected with the mild form decline over a number of years while the virulent form will kill a plant in a couple of years or less.