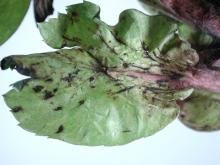 The most common symptom is blackened leaf veins. 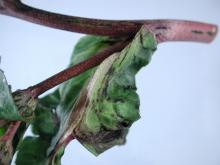 Black streaks may occur as lines and, when severe, are associated with distortion and stunting of affected plant parts. 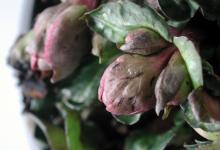 Cause 'Black death' has been reported in a number of states in the Western and Eastern United States as well as other countries. Although the cause of 'black death' has not been determined definitively, evidence points to a virus as the probable causal agent, specifically a Carlavirus tentatively assigned the name Hellebores net necrosis virus (HeNNV). HeNNV is genetically distinct from other viruses detected in hellebores such as Hellebores mosaic virus, Cucumber mosaic virus, Tomato spotted wilt virus and Chrysanthemum virus B. None of these other viruses have been associated consistently with 'black death' symptoms. HeNNV is serologically related to other Carlaviruses including Hellebores mosaic virus. HeNNV has been detected in the pollen of symptomatic flowering plants, but little is known about the potential for pollen transmission of this virus. Symptomless infection may play a significant role in widespread dissemination of the 'black death' causal agent.

A limited number of aphid species have been demonstrated to colonize hellebores, one or more of which may serve as vectors of the Carlavirus. The hellebores aphid (Macrosiphum hellebori) has been recovered more frequently than other aphids on symptomatic hellebores plants in the Pacific Northwest, but this aphid remains to be verified as the vector of HeNNV. The crescent-marked lily aphid (Aulacorthum circumflexum) and the violet aphid (Myzus ornatus) have also been found to colonize hellebores.

Symptoms of 'black death' have been reported primarily on the various cultivars or hybrids known as Helleborus x hybridus (formerly H. orientalis). Little is known about the susceptibility of other hellebores species, but symptoms have not been observed on H. niger or H. argutifolius.

Symptoms Symptoms typically develop on well-established (older) plants, particularly on newly emerging foliage and on flowers (usually in mid-winter or early spring). A variety of symptoms have been observed in association with 'black death,' the most common including blackened leaf veins; dark brown to black streaks on petioles; black streaks on flower bracts; and stunted, brittle, brown to black new growth. Black streaks may occur as ring spots or lines and, when severe, are associated with distortion and stunting of affected plant parts. Vein marking initially appears as light-colored thin lines but progresses rapidly. Infected plants are severely stunted. Depending on the virus isolate and hybrid line, the plants may linger in poor health for several seasons, or may die within weeks. Plants may be infected for 1.5 or more years prior to developing symptoms. Symptomatic plants do not recover. In the early stages of infection, the symptoms of 'black death' can be confused with leaf spotting caused by Botrytis, Coniothyrium, or Phyllosticta.

Symptoms of other virus problems include line patterns in the foliage (TSWV), mottling and rugose foliage (CMV).

Cultural control Control tactics are based on the likelihood that HeNNV causes 'black death' by means of systemic infection.