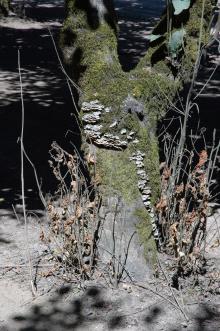 Heart rot fungi have colonized this trunk as evidenced by the fruiting bodies seen in this picture. 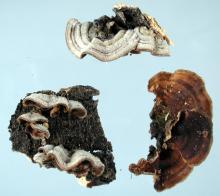 There are two different heart rot fungi fruiting at the base of this hazelnut tree. The hoof shaped structure on the left is a Ganoderma sp. while the smaller ones on the right are Trametes versicolor.

Cause Several fungi have been observed fruiting from decaying commercially grown hazelnut trunks and limbs in the PNW including Ganoderma sp., a Paxillus sp., Pycnoporus cinnabarinus and Trametes versicolor (also known as turkey tail). Most fungi that cause extensive wood decay of nut trees are classified in the phylum Basidiomycota. These fungi produce various basidiocarps, such as mushrooms and conks, containing basidia. Basidiospores are forcibly discharged from basidia and usually are disseminated by air currents. Wood decay fungi enter trees primarily through wounds that expose sapwood or heartwood. Injuries from pruning, sunburn, lightning, or cultivating equipment can expose susceptible wood. Large wounds, stubs and horizontal cuts are often entry sites for decay fungi. Mycelial growth of the fungus proceeds with colonization and utilization of wood as a food source. Basidiocarps develop after extensive colonization of the substrate in a suitable environment and under suitable physiological conditions. Asexual spores are not commonly produced.

Wood decay generally is observed in older trees after extensive fungal colonization, but it also can occur in young trees. Decay organisms can gain access into the tree through large pruning cuts, wounds, sunburn, or after insect attack. Decay fungi frequently function as secondary invaders following a succession of microorganisms, including bacteria, yeasts, and other fungi. Decay in a single tree may be caused by more than one fungal species.

Symptoms Two types of wood decay occur in living trees: white rots and brown rots. White rots cause moist, soft, or spongy wood that is a lighter color than sound wood. All major structural components of the cell wall-cellulose, hemicellulose, and lignin -are degraded. The strength of white rotted wood decreases only in advanced stages of decay.

Brown rots of wood are brown, dry, and crumbly, with longitudinal and transverse cracks. Most of the cell wall polysaccharides are degraded, but the lignin component is unchanged or slightly modified. The strength of brown rotted wood is significantly reduced or lost entirely shortly after decay begins. These rots usually are in exposed wood and can cause extensive damage, resulting in structural failure.

Wood decay leads to limb breakage, uprooted trees, trees broken at the soil line during windstorms, or decreased tree vigor and dieback. The production of fruiting bodies, such as conks or shelves, from trunks and limbs indicates extensive decay.