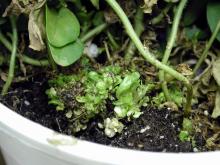 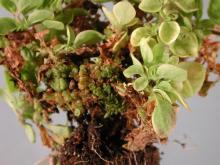 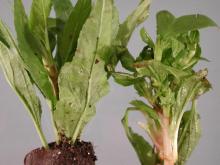 Cause The bacterium Rhodococcus fascians is a Gram positive actinomycete. Recent genomic studies have found there are at least 13 different genetic groups of R. fascians, meaning it is a species complex. Pathogenic Rhodococcus are capable of infecting at least 44 plant families and can infect woody and herbaceous plants, including both dicots and monocots. Herbaceous perennials are most frequently affected. Field observations suggest populations of R. fascians may persist in soil for one or two years when associated with infested plant material. The bacteria do not survive long in soil without plant debris. R. fascians will move in water, although this is a passive process as these bacteria have no ability to move on their own. The pathogen can remain viable in irrigation water for as long as 90 days in the absence of a host, and plants may become infected from either roots or foliage that has come into contact with infested water.

On infected plants, bacteria are primarily found on the surfaces of the leaves, petioles and stems. There is no evidence that R. fascians can systemically infect plants. The bacteria can be present on plant surfaces for months before symptoms develop. Wounds are not necessary for infection to occur. Cutting tools can transmit the bacteria, and transmission in higher with plants with "juicy" stems or branches. Taking cuttings from infected plants, irrigating with infested water, and movement of infected plants between nurseries are the primary ways by which the disease is spread.

Symptoms A proliferation of partially expanded buds or shoots (a leafy gall) is the main symptom of both woody and herbaceous plants. These often occur at the base of the plant, but may also be present on branches. Lilies show distorted bulbs when infected; hostas may produce abnormal bulbils at the base of a diseased plant. Symptoms may be confused with those caused by crown gall bacteria, growth regulator effects, somatic variations of plants in tissue culture, or eriophyid mite infestation. Plants affected by this bacterium often grow with less vigor, have an abnormally short stature, produce fewer flowers, or have reduced root growth, although this varies with the plant species. Plants may harbor R. fascians without showing symptoms.

Cultural control The management measures given below are for production greenhouses and nurseries. Diseased plants found in home landscapes can be left as they are or removed. The disease does not spread very far outside of production settings and does not pose a significant threat to home gardens.

Disease management depends on prevention. It is best to analyze your production system from top to bottom to identify points where the bacteria can be entering your system, and work to eliminate the risk at these critical points. The idea is to be proactive rather than reactive. Once the plant is introduced into a greenhouse, sanitation is extremely important.

Chemical control The bacterium can be found internally within plants to a limited extent, so topical applications of bactericides will not eradicate the bacterium. In greenhouse trials with multiple products, none were able to prevent infection of inoculated plants.