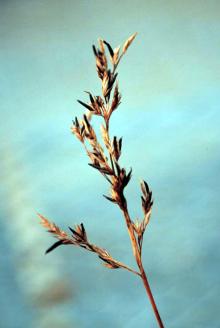 Cause A fungus, Claviceps purpurea, that affects about 400 species of grass as hosts, including all species grown for seed. The disease is most common in bluegrass, bentgrass, and Chewing's fescue but may occur in perennial ryegrass or tall fescue. Sclerotia of the fungus overwinter on or near the soil surface and germinate in spring, giving rise to stalked, spherical structures that eject ascospores. The flower is the only part susceptible to infection. The degree of infection depends on the amount of inoculum present and on the susceptibility of the crop species. Temperature, light, and other environmental conditions that affect the duration and uniformity of flower opening also determine the severity of infection. Infected florets exude a sticky, viscous combination of plant sap and conidia, commonly referred to as honeydew. Its high sugar content attracts insects, especially flies, which efficiently spread the disease (secondary spread). The disease cycle begins again when mature ergot fall to the ground.

Flower structure is important in the host's susceptibility to ergot. Species in which glumes tend to remain closed during flowering generally escape infection. Grasses such as annual bluegrass are highly susceptible, and their presence as wild grasses in field borders and headlands are an important source of inoculum.

Symptoms Hard, gray to purple-black, elongated bodies (sclerotia) replace seed. Sclerotia range from similar in size to a normal seed to two to three times longer than normal seeds. The sclerotial stage is preceded by a "honeydew" stage in which a sticky mass of conidia oozes from infected florets.