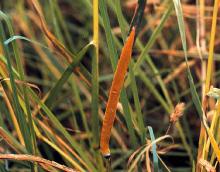 Cause An endophytic fungus, Epichloe festucae (fine fescue) or Epichloe typhina (orchardgrass), that consists of a mass of white fungal tissue. Choke had been found primarily on Chewing's fescue and red fescue but during 1996 was found also on orchardgrass in Oregon. On orchardgrass, the white mass is visible during May and then develops into an yellow fruiting body (stroma), up to several inches in length, producing numerous spore-bearing structures (perithecia) containing spores (ascospores). The fungal stroma is produced around the leaf sheath and may prevent elongation of seed heads, hence the name "choke." Ascospores are forcibly discharged, usually in early evening, and presumably serve to spread the disease, although that has been well documented only in orchardgrass. Stroma formation requires that the host's floral apex grow slowly at a critical stage of development (between "double ridges" and "spikelet primordium") and that the fungus grows rapidly. No choke develops if the host grows rapidly through this critical developmental stage. If a stroma does not form, infected fescue plants can produce numerous seed, a high proportion of which is infected by the fungus. In orchardgrass, seed transmission is very rare. The fungus may exist endophytically in many clones of a grass but fruit only in a few clones. In orchardgrass, the fungus spreads by means of ascospores, ejected from the fungal stroma, which can penetrate healthy plants through the cut ends of stubble at harvest. Ascospore release ceases soon after the stroma-bearing part of a choked plant has been cut off.

Symptoms In summer, the mycelium forms a white, felt-like band of tissue (stroma) that encloses all or most of the spike or inflorescence as it attempts to emerge from the leaf sheath. Stroma development may prevent the inflorescence from emerging and developing a seed head. On orchardgrass, the white stroma, typically produced during May, changes to bright yellow as the perithecia form.

Cultural control Roguing plants with stroma usually is unsuccessful because of successive tiller formation and seasonal variation in plant growth and development.